Are Brits any better at PES than they are at actual sports? 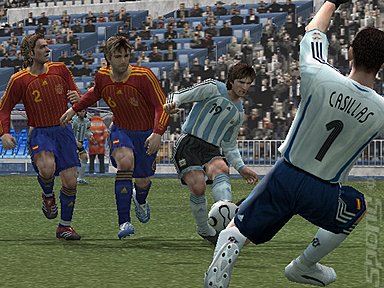 Screen from PES 6
Konami has announced the heats for PES Rankings, the official league for Pro Evolution Soccer fans. Following the success of last year's league, they've divvied up the North and South into two different heats.

The winners will get the opportunity to show English football off on the global stage. Since the problem with British football is that most kids would rather have a nice sit down than get out and get good at the game, SPOnG reckons we might fare a bit better at PES than we do in the real game.

Entry is free; Northerners can sign up here, while Southerners can get on board here - but frankly we don't reckon they should bother.

For more on PES 6 click here, or to have a look see what Konami has in store with PES 2008 head this way.
Companies: Konami
Games: Pro Evolution Soccer 6