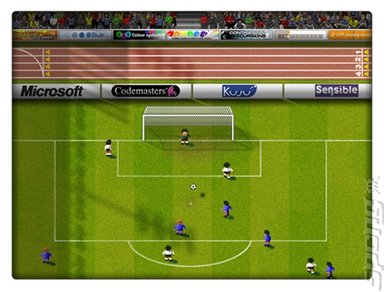 Forget the new Pro Evo (well, clearly, don?t forget, just put it out of your mind for a while) because this August bank holiday is all about the big headed daft old monster that is Sensible World of Soccer on Xbox Live Arcade.

Codies held a Sensible World of Soccer tournament in London yesterday, at which it was revealed that Sensi will be hitting Xbox LIVE Arcade on August 29th, to coincide with the start of the new football season. Handy that!

Sensible World of Soccer on Xbox LIVE Arcade is a tarted up version of the classic original, with the requisite HD visuals and Xbox LIVE multiplayer. SPOnG imagines that much of this autumn is going to be eaten up by online Sensi battles.

However, the eternal question still remains. Sensi or Kick Off?

This is cool though, is it free or for loads of points?

pinky007 7 Jul 2007 01:44
2/2
Was Striker that really sh*t game my Rage?
Let?s be honest now, the only real football games were Kick Off and Sensible Soccer (at least during the Amiga and ST part of history).
It was a pretty close cut thing for me and really came down to the people you played the game with. Kick Off was a lot more frantic and mad cap (great when every one was pissed), where as Sensible Soccer was more a refined challenge?
I just think you are trying to find an excuse to post in the forums now! No one could ever think Striker was any good, unless you forgot to take of your boxing gloves after waking up in the morning.