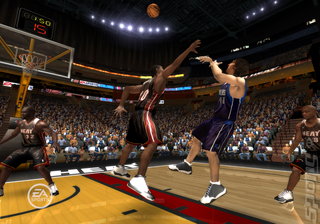 All Images (14) »
SPOnG informed you earlier this week about EA’s plans to make its sports titles on Wii more family-friendly with ‘Family Play’ – essentially taking the positioning of characters out of the human players' hands, enabling players to merely waggle the Wii Remote for essential actions – passing, shooting, throwing and so on.

“Once in the game, Advanced users take complete control of all aspects of the gameplay through intuitive Wii gestures using both the Nunchuk and Wii remote. EA SPORTS Family Play offers a simplified control system using just the Wii remote that enables novice players to focus on having fun while the console does the rest. With the Wii remote in hand, players control key actions – such as shooting, passing, snapping, and throwing – while the console controls the rest. It’s like having an invisible helper on your team.”

According to Dave McCarthy, Executive Producer for the three games developed at EA Canada, “EA SPORTS Family Play on the Wii creates an incredibly accessible and user-friendly experience that the whole family will enjoy… While many fans love to control every piece of the action, novice players can have just as much fun jumping in to throw a touchdown pass, nail a three pointer or take a shot on goal. Family Play brings together fans of all ages to enjoy playing EA SPORTS games, and even let’s them ease in to Advanced play if they desire.”

SPOnG, for one, cannot wait to finally try the new Madden NFL 08 on ‘Family Play’ mode later this year, as we thoroughly enjoy all the throwing and shoving bits of the game, but, being Brits, we have no idea about the difficult moving around and strategy bits. (Also, as a side note, it’s not football too, as it involves HANDS.)