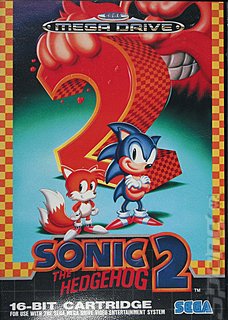 SPOnG remembers being 'up 2 it.'
Nintendo and SEGA get loved up again this week in the Wii's Virtual Console offerings. Available for your gaming pleasure are Sonic the Hedgehog 2, Ecco: The Tides of Time, Golden Axe II and HudsonSoft's Dragon Spirit.

Originally released on the Mega Drive in 1992, Sonic 2 marks the first appearance of the blue speedster's deformed sidekick, (Two) Tails. Once again Sonic's on a race to gather up the missing Chaos Emeralds and take down the maniacal Dr. Robotnik (no, we're not caving to SEGA's renaming of the evil oval in this case) before he creates the Death Egg warship. You can catch up with Sonic for 800 Wii Points.

Next up is another animal caper in the form of Ecco: The Tides of Time. Following the events of the first Ecco game, that evil bint known as the Vortex Queen has now made it to Earth and managed to establish a new hive. It's up to you to navigate the ocean depths and solve puzzles in order to take down the aliens and save the world. You can dip into Ecco for 800 Wii Points.

The final offering hailing from the Mega Drive is Golden Axe II. Death Adder might be living up to his name and out of the picture, but a nasty chap going by the name of Dark Guld (without a prefix like 'Dark' or 'Death' you're just not evil) has got his mitts on the Golden Axe and plans to destroy it. Enter a handy barbarian named Ax-Battler along with his buddies Tyris-Flare and Gilius Thunderhead to step up and brawl their way to the axe's recovery and victory. You can mix it up with Ax-Battler and his pals for 800 Wii-Points.

Last up this week is the Turbographx shooter Dragon Spirit. More mysticism abounds as a young soldier going by the name of Amul battles his way across valleys, deserts and the ocean floor to save the Princess Alicia from the evil serpent Zawell. Could he really not find any help, though? He's a soldier, so presumably he's part of an army. Surely he's not its only recruit? Fortunately, he's got the power to turn into a blue dragon and other abilities to pick up, so the fact that his mates are so bloody useless shouldn't be too much of a handicap. You can get your mystical freak on for 600 Wii Points.

deleted 6 Jul 2007 10:11
1/2
I bought the sonic mega collection on gamecube so instead of wasting some wii points i just stick the disc in for 5 mins then take it out and probly never play it again.

JPV711 6 Jul 2007 19:23
2/2
"Once again Sonic's on a race to gather up the missing Chaos Emeralds and take down the maniacal Dr. Robotnik (no, we're not caving to SEGA's renaming of the evil oval in this case)" Love the sentence in brackets. Let's all refer to him as Robotnik and maybe SEGA will stop calling him Eggman.
Posting of new comments is now locked for this page.