FIFA '08 Gets Family Playing With Wii 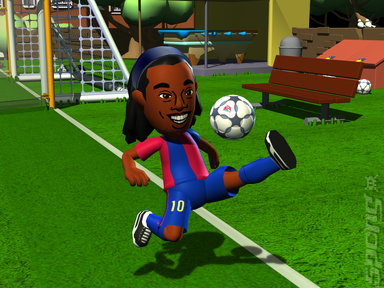 Life's good when you're Ronaldinho.
All Images (2) »
EA has unveiled a new gameplay mode that will make sports titles such as FIFA '08, Madden NFL '08 and NBA Live '08 more casual-gamer-friendly on the Wii. Dubbed 'Family Play', the mode is aimed at making sports games more intuitive for your non-gamer Gran.

Basically, the mode will take the positioning of characters out of the human players' hands, enabling them (the humans, obviously) to focus on gesture-based actions such as passing a ball, shooting or taking a throw-in. Only the Wii Remote is used, without even the baggage of button pressing.

The mode is optional and can be activated at any point during the game by simply unplugging the nunchuk, meaning a non-gamer can jump in at any time. It will also enable you to continue playing with the more complex full control system while your Gran (or someone from a non-football playing nation such as the United States, for example) gets in on the action.

Family mode follows the example of Nintendo's own Wii Sports. The control system has the distinct whiff of something like Wii Sports Tennis, which requires players to control only the shot, leaving your avatar's movement to the game's AI.

EA already took tentative steps towards more family-friendly sports games with its announcement of 'Footii Party' in the Wii version of FIFA '08.

SPOnG has mild reservations about the gameplay mode. We've seen our dads when a Huddersfield Town match goes awry (or 'on any given Saturday') and we don't know if rabid arm-flailing-with-indestructible-Wii-Remote-in-hand is something we want to introduce to the world.

Other than that, SPOnG's pleased to see EA strengthening its support of Nintendo's platforms. We're also glad to see a third-party publisher doing something creative with its ports of multi-platform games to the Wii instead of the usual bland wrist-flicking controls we're becoming accustomed to.
Companies: Electronic Arts Nintendo
Games: FIFA 08 Madden NFL 08 NBA Live 08