Will it track spherically? 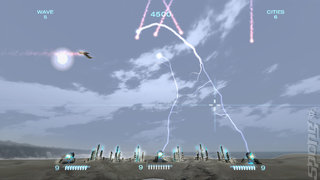 All Images (3) »
Missile Command sets up shop on your Xbox today, with the 'golden age classic' making its way onto Xbox Live Arcade.

If you don't remember Missile Command, don't feel embarrassed. It was first released by Atari as an arcade game in the land before time, otherwise known as 1980. We'll let Microsoft describe it to you:

?While staying true to the original arcade classic, the enhanced 'Missile Command' for Xbox LIVE Arcade has players acting as regional commander of three anti-missile batteries defending six cities in their zone. As Planet Zardon is under attack by an endless hail of interplanetary ballistic missiles from Krytol, players must act fast to fend off the missiles and keep their cities intact. Gliding across the sky, players complete levels by taking out all enemy weaponry. At the end of a level, players can earn bonus points for the more cities that remain and the fewer missiles that are used.?

SPOnG hopes and prays that Microsoft just forgot to mention the release of a swanky new peripheral to capture what once made Missile Command great: the trackball?. Frankly, however, we're not holding our breath.

As you might expect, Missile Command comes complete with a glossy 3D next-gen sheen, added to make the game palatable to our spoilt eyes. It also has a two-player mode that can be used either locally or over Xbox Live.

The game comes complete with the requisite 12 Achievements and 200 Gamerscore points and will set you back a modest 400 Microsoft Points.

?Trackball: a mystical spherical object embedded in an arcade machine and used to control the placing of your missile tower.
Companies: Atari Microsoft
Games: Missile Command