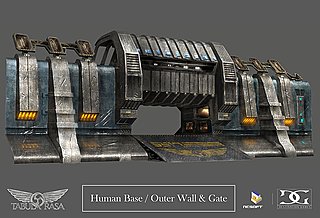 All Images (6) »
Joining the ever-expanding list of publishers bragging about their exhibits at the upcoming E3, NCsoft has just sent through details of its E3 line-up for next week, with a heavy focus on the legendary Richard Garriott's Tabula Rasa (pictured), Aion, Guild Wars: Eye of the North and Dungeon Runners.

NCsoft North America CEO, Robert Garriott, threw in the obligatory corporo-quote, saying, "NCsoft strives to deliver the highest quality online entertainment possible, and these products represent the next generation of online games. This E3 meeting will provide a window for the public to see the breadth of the variety of game genres and business models NCsoft provides, as well as show off how advanced and exciting our products are."

Tabula Rasa has been in closed beta testing since May and is set for launch in autumn and, from the press bumpf, is apparently “poised to evolve the massively multiplayer online genre with a host of fresh features such as a character cloning system, dynamic battlefields with contested control points, deep storylines with ethical parables and fully integrated voice chat.”

Ethical parables? SPOnG looks forward to catching up with Richard to quiz him more on that one!

Anything from Richard Garriott is surely going to be a game we’ll no doubt be talking about years down the line, so we look forward to bringing you all the latest on Tabula Rasa.

Elsewhere in NCSoft world, Aion, sound like pretty much bog-standard fantasy MMO stuff, described as “a true fantasy world where divine beings wage a war that will determine the future of the world.”

And Guild Wars: Eye of the North is the first ‘true’ expansion to the Guild Wars franchise, and “delves into the dungeons and caverns of the lands of Tyria that players first explored in the original Guild Wars game.”

Finally, you can see SPOnG’s recent review of the free-to-play Dungeon Runners here.