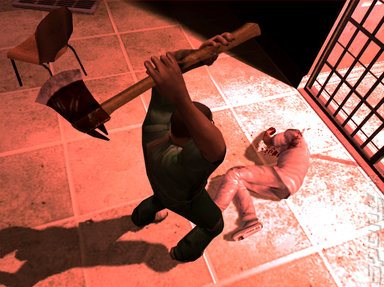 ?Most 7th and 8th graders (ages 12 to 14) regularly play violent video games. Two-thirds of boys and more than one in four girls reported playing at least one (ESRB) M-rated game "a lot in the past six months."

The researchers found that the Grand Theft Auto series is the most popular among boys in the age group. A little more surprisingly, the report states that the series is also second most popular among girls, coming in behind The Sims. SPOnG's just relieved that Manhunt 2 won't be on shop shelves any time soon to join GTA in teenagers' downtime.

When SPOnG's resident 14-year old took a break from cleaning the chimney and levelling up our WoW avatars, for a smoke, we asked him whether he plays games to manage stress. He looked at us, squinted and said ?No?, before punching us in the collective stomach while uttering an unrepeatable string of expletives.

Before we all get to feeling demonized and picked on again, however, SPOnG would draw your attention to some of the more positive comments from Cheryl K. Olson, ScD, lead author of the study. "Contrary to the stereotype of the solitary gamer with no social skills, we found that children who play M-rated games are actually more likely to play in groups - in the same room, or over the Internet," she said.

SPOnG hopes the American Medical Association is listening, and considers that videogames aren't entirely evil before it decides that gaming is an addiction to be classified alongside alcoholism and drug misuse.

?...violent game play is so common, and youth crime has actually declined, so most kids who play these games occasionally are probably doing fine," Olson says. "We hope that this study is a first step toward reframing the debate from 'violent games are terrible and destroying society' to 'what types of game content might be harmful to what types of kids, in what situations?' We need to take a fresh look at what types of rules or policies make sense."

The report arises from a ?study? that had a sample consisting if some 1,254 children. SPOnG is dubious of the word ?study? in this case, as the research was carried out on what MGH refers to as a ?survey day? at each participating school. It did not arise from observation of participants over a period of time. As such the results are based on teenagers' verbal responses, and SPOnG doesn't need to tell you that, sometimes, they lie.

Once again SPOnG is brought back to the opinion that if indeed a high number of under-age gamers are playing 'M' or 18-rated games (and frankly, we don't doubt it) yet violent crime is on the decrease in the United States at least (U.K. figures fluctuate depending on what the required response is), there would appear to be a disconnect regarding the effects of gaming on crime.

SPOnG awaits a survey of adult U.K. gamers regarding their gaming habits; we'd imagine the first response might be, "We don't know, because as adults we don't get the choice in what we're allowed to buy..."
Games: Grand Theft Auto IV The Sims

What 12 year old (boy) plays games like Pikmin, Animal Crossing, or other cutesy games? Few do, and chances are those who do are afraid to admit it.

They all want GTA or Tekken at the very least. Just like i wanted Mortal Kombat on my SNES and was hugely disappointed that it didn't have "red blood".

That's why the good old "Nintendo=kiddy" remark always cracks me up... because those claiming it, are rarely older than 15.

Some of the best games on nintendos console are the "kiddy" style games but i never discovered how great they were till i reached 21, before that i was smashing frozen Reptile with Sub Zero!

Joji 4 Jul 2007 12:50
4/6
Not surprising really. I recall my childhood. Violence will always have a lure because its a base part of mankind. From a rebelious teen age, you are looking more to break out of the safety net your folks have placed you in for years, so taking part in things they disapprove of is all part of it.

From the age of seven to nine, I had a big attraction to action and horror films. I used to spend summer holidays with my cousin watching Robocop, Aliens, Hellraiser etc. Games were no different at that time either. I loved to play Mindscape's Moonstone on the Amiga, which appeaered before Mortal Kombat spilt any blood. Both loved to spill the ketchup though, with a sense of humour.

Violence in entertainment, I believe the majority of kids are able to view them as such, just entertainment and switch off and back to reality. Sure, fluffy Nintendo games are cool too, but sometimes you need some salt, to even out all that sugar.

UnNown 25 Jul 2009 22:41
5/6
Hey no one asks the kids opinion about it and most kids would want games like GTA, Mortal Kombat, Doom(No one mentioned that) to be "legalised" and ultimately it is the targets choice if they accept it or deny it