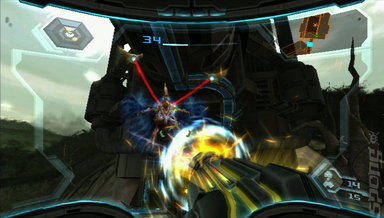 All Images (5) »
Michael Kelbaugh, president and CEO of Retro Studios, has revealed that one of the most highly anticipated Wii games of 2007, Metroid Prime 3: Corruption will shockingly NOT feature an online multiplayer option. The game is Wii's major FPS, with some sources claiming it will be bigger than Halo 3.

When asked directly about online play, Kelbaugh said, "No. It's something we talked about early on, but we only have so many resources. We opted to devote those resources to making a better single-player experience."

Apparently the game is all about the Wii controls according to Michael - ?destroyer of dreams? - Kelbaugh, who notes that, ?The integration of the controls with the Wii controller is a phenomenal difference, and a dramatic improvement in the experience as a whole.?

He adds, ?When we first saw the Wii controller, our game director Mark Pacini was really concerned about being able to take all the controls we used in Metroid Primes 1 and 2 - because, really, you use every single button in those games - and morph them into the Wii controller. So, we spent a tremendous amount of time making that as seamless and as intuitive as possible. And I think we accomplished that. I think we did a really good job, so that you can pick the Remote and Nunchuk up and not be intimidated.?

Finally, discussing the ongoing delays with Metroid Prime 3: Corruption Kelbaugh revealed that, ?Mr. Iwata challenged us last fall to make this equal to, if not exceeding, the Zelda experience. And he said he would support it by giving us more time. It was, ?Here's the bar. What is it going to take to reach it?? And the obvious answer was, ?Well, we're going to need more time.? And he agreed.?

Yeah, yeah, yeah, okay, its quality-driven, not date-driven. We get it. Here?s some recent screens from the game. But no online play? Jeez?

Joji 3 Jul 2007 11:45
2/18
I'm disappointed by the lack of multiplayer, to follow up on brilliant DS Metroid Hunters and more so Wii Mario Strikers. Why on earth did Nintendo want Wii online again? What Nintendo are missing is that extra online play stops people finishing and trading in their games. They still have a lot to learn.

They could release something later, but with Wii not having a hard drive it sounds very doubtful, as the multiplayer files could/would be fairly large. Possibly more than its internal 512mb. Only other option would be to release another Metroid game dvd. Would you buy it again?

majin dboy 3 Jul 2007 11:54
4/18
yeah its dissapointing but does anyone remember the multiplayer in MP2?it was awful and although hunters(DS) was great, i would prefer a fantasic single player game and leave the online FPS games until the wii can have consistantly good->greaat games in this genre.

Joji 3 Jul 2007 12:24
6/18
I don't know Nintendo, just seems like two steps forward and one back sometimes. Online multiplayer options are there to take already good games to a new level, but they sometimes fear trying, which is a real shame. This now makes me wonder if Battalion Wars 2 will do the same and have no online play options. If that follows suit, I'll be removing what little hair I have in frustration.

It's fine you are in the lead, Nintendo, but that can change. Don't get bleeding complacent, you need to move with the times.

tyrion 3 Jul 2007 12:53
7/18
What I'm worried about more than the lack of online in and of its self, is that they couln't do it because "we only have so many resources". How can Nintendo and Retro not put more resources into Metroid, given that it's one of their biggest games coming up?

Joji 3 Jul 2007 13:07
8/18
That's it. Nintendo have more resources than most, but this seems difficult for them, possibly due to lack of experience in this field, I don't know. I would have prefered they'd held MPC til xmas, so long as we go that vital online content. Why was it okay to do this for Metroid Hunter and not MPC?

Makes no sense to me at all. Sure, I want good single player, but is it really too much to ask for what we should get too, online multiplay? Nintendo's casual attitude to it doesn't help either. Perhaps some market research is their next best move and don't forget the normal gamer either.

All this talk of MP3 being a halo killer is now moot. I know for me half the reason Halo 1/ Halo 2 were so epicly good was the multiplayer component. Don't get me wrong, i'm sure the single player and game overall will be fantastic, but what really sold me was the multiplayer/online multiplayer.

Thats what I get for trusting the hype machine I suppose.

Oh well, we can only hope some other developer picks up the baton and gives us our wii online fps kicks.

PS: considering the HUUUUUUUUUGE piggy bank nintendo has I find the resources thing hard to buy

It's baffling. Mario Stikers Charged was fun, sure, but Metroid should have been the first proper online game to really show off what online gaming on Wii could achieve. I'm still looking forward to it, don't get me wrong, but it is a MASSIVE oversight on Nintendo/Retro's part to think that they can get away with the 'limited resources/want to focus on the single-player experience' line...

Ah well, at least Wiis don't cost a bomb or overheat and break. Like certain other consoles (and rubbish botched terrorist bombs).

I hope the backlash gets Nintendo thinking, you can't put one foot in and another out anymore. Commit to online gaming options and show it or just don't bother teasing us with more half hearted stuff. We had enough of this crap with GC, we shouldn't be getting this again.

Those excuses are poor, get real Nintendo/Retro. What was that someone said about Halo beater? Lol.

Besides, you buy Metroids for the singleplayer expercience, like Zelda...which Metroid is frankly a sci-fi version of...

No you don't and no it's not. Since the DS version of Metroid I've imagined the possibilities of a decent online Wii Remote controlled fps - and like many others imagined that Metroid Prime 3: Corruption would be that game. Whereas now it seems it is going to be a tarted up version of the GameCube game with Wii Remote control functions. Which in my OPINION is the difference between a 'might get, wait and see' game and a 'cannot wait for this to arrive' game.

We have been patient enough. I love the Wii, its new controiller, wii sports but I'm also a hardcore Nintendo player. I'm so dissappionted that this title is not online. Nintendo did such a quality job on the 'gamecube conversions' of Zelda: TP and RE4: Wii edition - we KNOW the Wii controls are the future of gaming, I didn't think for one minute Retro would put their name to anything that was inferior in control to either MP or MP2.

After setting the precident of the DS metroid prime being online I thought it was a given that MP3 for the Wii would be also.

Yes, Nintendo you have captured the non gaming casual mass market (deservedly so) but FFS dont forget your loyal hardcore following. Announce another delay - one more wont hurt! - and reverse this decision now.

AdamSq 3 Jul 2007 20:15
16/18
I whole heartedly agree with the last comment. I have suddenly lost most my enthusiasm for MP3 now, and i am thoroughly dissapointed with Nintendo. I do like good one player games, but having recently experienced the difference in excitement and involvement with online games (several Xbox Live titles & Mario Strikers), this simply will not do. They can't seriously compare it to Halo 3 now - the online multiplayer aspect to that franchise is it's main attraction.

I am still hoping that the big N will announce more online capabilities for Wii Connect24 at E3 next month. Give us a real-time 'online-status' Friend List please! You seem to be making things very difficult for us and ultimately yourself.

Thinking about it though, after seeing the futile attempts to 'make the Wii HD' by Matt Casamassina I'll not bother.