Can anyone see an original game lying around? 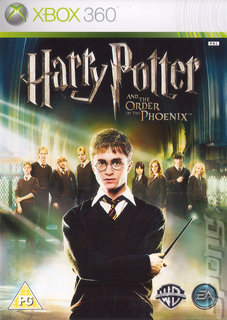 Badass.
In a frenzy of movement the Top 5 in the All Formats Charts is occupied by an impressive four new titles, all of which are licensed properties and/or sequels.

If you have any kind of foresight you'll no doubt be unsurprised to see that Harry Potter has taken up residence in the Number 1 slot, with EA's Order of the Phoenix debuting on more platforms than you can shake a unicorn-hair-threaded-wand at.

Harry's followed up by a rather more sinister look at the supernatural in the be-tentacled form of The Darkness. To find out why 360 owners are buying 2K's fearsome first person shooter check out SPOnG's review.

Next up is yet another licensed property in the form of Activision's Shrek the Third, once again on just about every platform you care to name. Shrek was lurking unluckily at Number 13 last week, so Activision's no doubt thanking the release of the film and the PS2 version for getting it out of that spot.

Next up is Capcom's Resident Evil 4. Although not strictly a new release - since it's been lurking on the GameCube, PS2 and PC for several years now - it is back in the charts thanks entirely to its release on the Wii. Rounding out the all-new Top 5 is More Brain Training from Dr. Kawashima on the DS, which appears at Number 5.

Number 6 is where Forza 2 from Microsoft skids to a halt. It's followed up by Ubisoft's Rainbow Six Vegas, which gets a re-entry into the Top 10 thanks to the game's belated PS3 release.

Another couple of movie tie-ins are behind the neon decadence of Rainbow Six, with Johnny Depp making crazy eyes in Disney's Pirates of the Caribbean: At World's End at Number 8, and 2K's Fantastic Four: Rise of the Silver Surfer riding well at Number 9. Rounding out the Top 10 is the ever-insistent Wii Play, which is enjoying a long stay at the top thanks to more readily-available Wii hardware.

Also new to the Charts this week are Codemaster's Overlord, which occupies the Number 13 slot, Midway's 360-exclusive Hour of Victory, which lands at Number 23, Ubisoft's release of Call of Juarez on the 360 boosts the game into the Top 40 at Number 26 and Microsoft?s Tenchu Z, which debuts at Number 31.

After a flurry of releases last week it looks like the games industry's settling into its summer lull, but look out for Scarface: The World is Yours on the Wii next week.

You can see the Charts in full here.