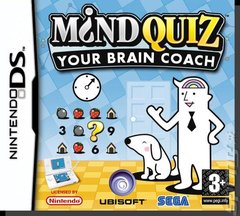 A call to a local BBC radio phone-in show has lead to the rapid withdrawal of Ubisoft's Mind Quiz game for PSP and DS.

The Steven Nolan Show in Northern Ireland received a call from a lady who stated that the game called players "Super Spastic" in the event that they failed to reach a certain 'brain alertness' level.

Her son, Austin, who suffered from cerebral palsy, had recently died.

She contacted Nintendo of America who told her it had nothing to do it, and advised her to contact Nintendo of Europe. NOE told her it was nothing to do with the game and that she should contact the 'producer'. The radio show did indeed do this and, to its credit, Ubisoft responded quickly, stating, "As soon as we were made aware of the issue we stopped distribution of the product and are now working with retailers to pull the game off the market.

"The game was developed in Japan, and we unfortunately did not pick up on the offending word in our quality assurance. We are currently working with the developer to find a way to rectify the issue."

Quick definition of 'Spastic': "Relating to or affected by muscle spasm".

You can hear a transcript of the show here.
Companies: Nintendo Ubisoft
Games: Mind Quiz: Your Brain Coach

majin dboy 2 Jul 2007 11:22
1/10
hahahahahha, good old nolan, he is seen as a prick over here by some and a legend by others.i worked in UTV were Nolan use to work and apparently he is as gay as anything.....just thot i wud through that in there,

Master Chef 2 Jul 2007 14:03
3/10
when the BBC ran this story on the website it claim that the game "uses a term abusive to people with disabilities"

I wonder how the people with disabilities that dont involve involuntary spasms feel now that the term "spastic" - in its pejorative sense - now includes them?

the BBC story went on to be similarly vague allt he way through and didnt even mention the abusive term no doubt for fear of offending people. bless.

Tim Smith 2 Jul 2007 14:42
5/10
Master Chef wrote:
the BBC story went on to be similarly vague allt he way through and didnt even mention the abusive term no doubt for fear of offending people. bless.

This is one of the reasons we put the effort in to go and listen to the show using the deeply complicated "Listen Again" function, our ears, eyes and critical faculties - not the most difficult piece of research ever.

The fact that the BBC ran the story but didn't give the detail (the actual point of the damned thing) is "political correctness gone mad". It provides no information but plenty of room for conjecture. Somewhere along the way, the BEEB has forgotten that reporting on something is different to doing that thing.

Joji 2 Jul 2007 15:16
6/10
Heard about this over the weekend. Bad but interesting that it passed the ratings, which proves that somethings in games can go unchecked. There's just too many titles for anyone to do a thorough enough job. Funny thing about this is, it seems while it isn't meant to offend but has, again very late in the day. At least Ubi sought to correct the error though. I might have to hunt for this rare cut though, now.

With regards to the BBC and their reporting, you'll find that them and Sky, always report on anything negative about games with such PC laced biased, that it isn't funny. The only positive light they ever paint of games is when a console is beng launched. They never dig deeper into anything unless its negative about games (and even that isn't done properly), this now has me questioning what else they don't report properly and fairly on.

They are not to be trusted anymore, since they are rivals for viewers/gamers attention, and frankly they have never favoured games. They can go to hell.

Joji 2 Jul 2007 16:23
7/10
Something else. It's okay for people to complain, but what is never explained to them is that a large percentage of games are not created in the u.k (this is true of Manhunt 2 and Resistance too but never pointed out). What is considered offensive in one country might not be in another. It's difficult to please everyone.

Were the BBC any good at all, they would have pointed this fact out. Its impossible to please everyone these days.

Hey, I'd still buy a copy though. I have no problem with a game calling me or my friends names. People shouldn't take things like this so personally though, but each to their own.

I am confused, great one.

However, you also say that they shouldn't take it personally?

I must learn not to question... I need to meditate on this longer...

But lets summarise, how many problems have games had over the last few weeks? I'm fast loosing count and getting the impression the non gaming public have their knives out, then pass them to the news media to biasely twist and add salt and lime.

The result, games are painted evil again and apparently only kids play them.

virgo 6 Oct 2009 19:33
10/10
my son has cp also and my wife hit the roof, crazy how in this day and age a modern civilisation like japan doesn't understand our offensive genre of language...
Posting of new comments is now locked for this page.