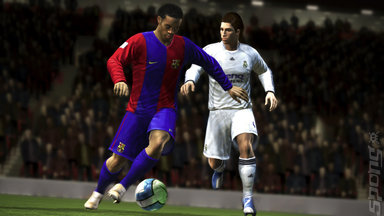 FIFA fans have hit EA up with an impressive 5,000 suggestions for the upcoming FIFA '08 at the company's community website, FIFPlay.com.

The suggestions mostly surround new leagues and teams as well as gameplay features. The suggestions include adding a stadium creator, 3D crowds, legend players/leagues, customized motions, Futsal, women's Football and new official tournaments. Whether any of the ideas will actually make the cut other than by happy coincidence, of course, is another story.

One SPOnG staffer (who may or may not be the third best footballer in the world) suggests that EA sneaks into the secret laboratory of Shingo 'Seabass' Takatsuka, the executive producer of Pro Evolution Soccer 2008, and has away with his game engine.

Some SPOnG staffers are less ardent PES fans, however, and are looking forward to seeing Ronaldinho's cheeky mug in the Wii version as we play through the various mini-games available.

You can find out more about FIFA '08 on SPOnG's dedicated game page, and have your say on what goes into the game here.
Companies: Electronic Arts
Games: FIFA 08 FIFA 08

Joji 29 Jun 2007 13:03
1/1
From what I've seen of the Wii version, it seems pretty interesting. Glad EA are listening to fans ideas. Women Football should have been included in FIFA ages ago, even if the game needed two dvds. Stadium design is a good option, but I'd like to see some love for indoor football too, as well as altitude performance levels that effect your players accordingly.

Speaking of Wii, Konami have said PE8/WE is going on to Wii in japan. Whether we'll see it is another thing, as they said nothing about it when recently bragged about it to europe/u.k. Why is that? Are the scared to even try or are they holding it back til later? Whether the Wii version will be online is another thing, (I'll be disapponted if its not) but I'll have the 360 one anyway.

Oi! Why's that box moving on it's own?