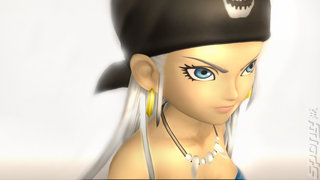 Mmmm, Dragony flavoured blue fun. I honour its joy giving. Fight!
As we reported back in March, Mistwalker's Blue Dragon is to hit Europe in August - that's August 24th to be exact priced at Ł49.99.

Fortunately, despite its dragony violence the game has been able to capture a 12+ rating and so is possibly okay to be played by adults.


According to Microsoft, ?Blue Dragon will usher in the next generation of RPG exclusively on the Xbox 360, with a combination of realistic environments, anime-styled characters, unique battles and a deep, compelling storyline.

"Bringing top Japanese developer talent to the Xbox 360, Blue Dragon is a culmination of the work of famed game producer Hironobu Sakaguchi of Mistwalker game studio and developer Artoon. This epic RPG features the character design of Akira Toriyama, who designed Dragon Ball Z and music by Nobuo Uematsu, the composer for Final Fantasy."

For more in-depth azure-lizard info, don't forget to read SPOnG's interview with Mistwalker's Hironobu Sakaguchi, which can be found right over here.

We're also told about additional 'kit', "In addition, adventurers can bring Shu, his friends and their quest to save the world to their websites with the official Blue Dragon fan site kit, which is available for download from Microsoft's Blue Dragon site. The Fan Site Kit includes artwork, skins, screenshots, forum avatars and more assets for webmasters to create their very own Blue Dragon fan site.

We're wondering how much webmasters will get paid for this? We wander off in search of answers...
Companies: Microsoft Game Studios
Games: Blue Dragon

Glad to see Blue Dragon. There's been some many good 360 games I'd kind of forgotten about it. So many games.....my wallet says ouch.

hollywooda 2 Jul 2007 09:06
4/4
If you want a GAMES console with awesome games NOW!, by a 360, if u wanna cheap blu-ray player that might get some good games get a PS3.
Posting of new comments is now locked for this page.