The Charts: Driving to the Movies 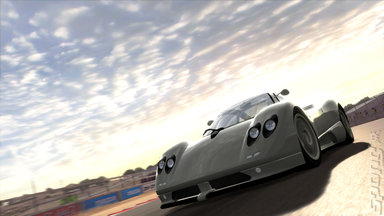 Seriously, it's huge!
It's all motorsports and movies in the Charts this week, with all the movers and shakers being either film tie-ins or driving games.

Three weeks into its lifespan Forza 2 isn't losing any traction, with Microsoft?s racing sim' remaining in pole position in the All Formats Charts.

Well, arguably it's losing a little bit of traction, with sales having dropped off 45%. It has, however, surpassed its predecessor. The first Forza title on the original Xbox was held back at Number 2 by the dark power of Lucasarts/Ubisoft's Star Wars Episode III: Revenge Of The Sith. You can find out what SPOnG thought of Forza 2 here.

2K's Fantastic Four: Rise of the Silver Surfer successfully, well... rises this week. Old chrome dome and his blue-suited buddies get a 70% sales boost and stretch up from Number 8 to Number 2.

Meanwhile, Codemasters' Colin McRae: DiRT manages to get a few revs up and climb a place to Number 3, despite losing 29% of its sales from last week. It performs a switcheroo with Disney's Pirates of the Caribbean: At World's End, which slips down the yardarm to Number 4.

Continuing the movie streak, Spidey proves he's got a bit of sticking power, with Activision's Spider-Man 3 climbing one place to Number 6.

Activision's next blockbuster powerhouse, Shrek the Third, enters the Charts (a tad unluckily) at Number 13. That's with the only the 360, Wii, DS and PC versions available. When the PS2 and PSP versions land ? on the same day as the film's released ? expect a big green splash.

The only other new entry in the Charts is (we probably don't need to tell you) another vehicular release. 505 Games' PS3/360 driving (admittedly with a healthy dash of combat) game, Armored Core 4, makes its Chart début at Number 39.

Next week, keep an eye out for The Darkness, Resident Evil 4 for the Wii, Lost Planet for the PC, Rainbow Six Vegas finally landing on the PS3 and PSP and some short chap called Harry doing something to do with flaming birds on a few platforms.
Companies: 505 Games Activision Codemasters Microsoft Nintendo Sony
Games: Colin McRae: DiRT Disney's Pirates of the Caribbean: At World's End Fantastic Four: Rise of the Silver Surfer Forza Motorsport 2 Shrek the Third Spider-Man 3