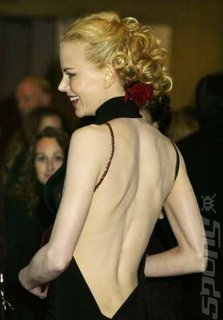 Kidman's back
All Images (3) »
Tom Cruise?s kooky ex-wife, Nicole Kidman, is to front Nintendo?s pan-European marketing campaign for More Brain Training on the DS, due for release this coming Friday.

The More Brain Training TV campaign kicks off in the UK tonight, with the first ad airing on ITV1 tonight in the high profile 7:45pm slot, for anybody that happens to be tuning in to Coronation Street.

Kidman says, ?I love the concept that Nintendo is reaching out to new audiences with their self improvement products like Brain Training. Most importantly, I?ve quickly found that training my brain is a great way to keep my mind young.?

Nintendo UK?s marketing director, Dawn Paine, adds, ?The Brain Training phenomenon is sweeping the globe, enjoyed by over 10 million people from grandparents to Oscar winning actors. We believe that Nicole Kidman?s leading role in the campaign and the revelation of her DS Brain Age will surprise and excite people all over Europe.?

As far as SPOnG is aware, Ms.Kidman's brain age has dropped from eighty to around the mid-thirties in the last two weeks.

Joji 25 Jun 2007 12:11
1/1
Smart move. Give the product a face people know and help it sell by the bucket load. This interesting because I don't think this kind of mainstream advertising, has been possible before with games.