Virtual Console: The End Of The '80s 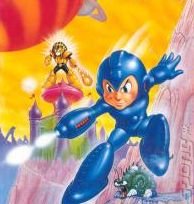 Sometimes it's hard to be a robot.
Ah, 1989. Thatcherism was in decline, George Bush (Senior) the first became leader of the free world, plaid was just around the corner... and the Western gaming scene was graced by Mega Man and China Warrior. Now Nintendo wants to take you back, with the release of those two esteemed titles on Virtual Console.

Capcom's little robot dude first made an appearance on the NES back in '89. Mega Man's a story of rising up against the limits set on us at birth to triumph in the face of adversity. He was originally built as a humble lab assistant, but ultimately must step up to take on the maniacal Dr Wily and his Robot Masters. Six robots means six stages, and it's up to players to navigate them using agility, speed, and a big ol' blaster. Mega Man is yours for 500 Wii Points.

China Warrior hails from HudsonSoft and the Turbographx. Acclaimed for its ground-breaking graphics, the game cast players in the role of a Bruce Lee-alike martial artist who must trek across four stages, each divided into three areas, defeating an onslaught of enemies. China Warrior is yours for 600 Wii Points.

The original Megaman met with critical acclaim in games magazines at the time. However, in comparison to the sequels, Megaman 1 was criticised as being a lot harder!

The difficulty level was eased somewhat in Megaman II(gave you difficulty options), which scored a MegaZone award (given to games that score over 90%) in GameZone magazine, and was one of the first videogames I ever owned, so definitely a favourite of mine.

Have always wanted to try out the original, but haven't seen it in any of my local indies.

Remember! The trick with Megaman is to figure out what weapons work best with what boss. Once you know the right combinations, defeating them becomes a lot easier, and you can work out the optimum order for taking the levels.

Joji 22 Jun 2007 12:28
2/2
Just get the Megaman Collection on import for PS2 (and bag a Swap Magic). Surely, you aren't scared of Sony knocking at your door? I thought PS3 was supposed to be multi region anyway?
Posting of new comments is now locked for this page.