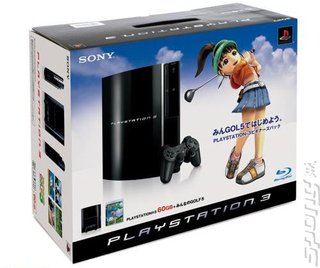 Image via Famitsu
Sony has just announced two new PS3 bundles for Japan that will mean, essentially, Japanese gamers are getting another PS3 price drop.

When you look at the price of the game, that's a saving of Ą4,000 (Ł16). Granted, the saving isn't exactly a monster, but it does represent a willingness on Sony's part to be flexible with the PS3's price in Japan.

The de facto price cut will no doubt come as a relief to Japanese retailers, with the PS3 having had several bad weeks in the Japanese hardware charts of late. Sony's no doubt hoping that the bundles will help push the PS3 back over the ?psychological? 10,000 sales per week mark.

This isn't the first time the PS3 has received a price cut in Japan. Before the system even launched the price was dropped thanks to Japanese misconception of the Yen's value against the American dollar.

One thing SPOnG found interesting is the very existence of the 20Gb bundle. Following the discontinuation of the 20Gb PS3 in the US speculation was rampant that Japan would follow suit, in spite of its half-hearted denial. Announcing a new 20Gb bundle, however, could be taken to indicate a continuing commitment to the model from Sony in Japan.

Of course, what all really want to know is when we'll see a similar deal on European shores. Japan's had sight of two now, and pays substantially less for the system anyway. SPOnG called Sony to ask just that but was told, ?We don't have any plans for that right now.?

Joji 20 Jun 2007 14:23
2/6
Yep, exactly why many aren't buying and they are right not to. I don't think this price drop will make much difference at all. If they are gonna do it they have to mean it and make it effectively large enough. Typical tight fisted Sony.
more comments below our sponsor's message

Why does the title of this news read "price cut" when it isn't at all? More traffic? :)

headcasephil 20 Jun 2007 15:38
5/6
it might not be that great as it is not a real price drop but its a game that might get the sales as iv played the demo and its fantastic the only problem is when are we in the UK getting the game hope it dose well

uncletato@xboxlive 20 Jun 2007 16:12
6/6
ps3 is a rip off, no doubt about it, and the blockbuster (Bluray) deal reaks of desperation! The same way EA sports locked out all competers with the NFL exclusive deal.Their running scared that the the UK and US are buying HD-DVD.(Copy nintendo with motion sensing check!, Copy xbox360's live believe me their trying! Force bluray on videogamers check! Price gouge check! Copy Microsoft achievements you better believe they are going to.)
Posting of new comments is now locked for this page.