Futuristic tiff mallets at the ready 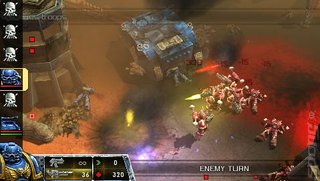 Bob's armour was really starting to chaff. He was getting angry.
All Images (3) »
THQ has announced that Warhammer 40,000 is going to make an appearance on the DS and PSP later this year in the form of Squad Command.

"Gamers play as the elite Space Marines of the Ultramarines chapter and strive to combat the encroaching evil of the ruthless and daemonic influenced Chaos Space Marines through 13 cinematically-tied missions. With a robust multiplayer mode featuring 9 unique missions, gamers will team up and go head-to-head with other gamers worldwide as either the Imperium of Man or Chaos Space Marines, ensuring hours of unique replayability."

For those of you not versed in Games Workshop lore, think big guns, big armour and big ugly things. Games Workshop fans might even argue that Gears of War took a strong visual cue from the table-top RPG.

Between this, THQ's scantily-detailed Warhammer 40,000 MMO and GOA's upcoming Warhammer Online (that's the old-school fantasy one) Games Workshop is gaining ground in the games market at the moment. SPOnG also noticed that the high street chain has slipped into a more prominent position in Leeds city centre. Actually, we're starting to become afraid...

Tuck into the screens below for a taste of futuristic tiff-mallet-waving portability.
Companies: THQ
Games: Warhammer Online: Age of Reckoning

RiseFromYourGrave 19 Jun 2007 20:13
1/1
love a bit of WH. i hope the ds version isnt just the husk of the psp version
Posting of new comments is now locked for this page.