There really is no excuse to not have played this now 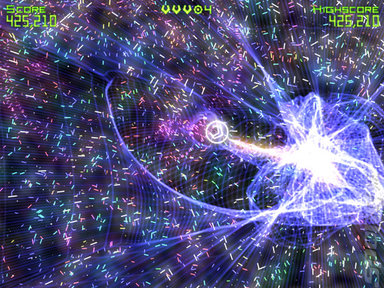 See. While a large portion of chips at our local branch of Harry Ramsden?s sets us back Ł1.30.

If, shamefully, you have still not yet played Geometry Wars: Retro Evolved then you really have no excuse now. Get it quick too, as it goes up to $3.95 starting June 22. Which is nearly a whole two English pounds. The price of two lovely saveloys.

"With over 13 million active accounts, Steam is the ideal platform for launching Geometry Wars: Retro Evolved for Windows XP," said Martyn Chudley, Creative Director at Bizarre Creations. "We hope to continue the success of Geometry Wars by introducing its award-winning gameplay to one of gaming's largest communities."

And don?t forget that Geometry Wars: Galaxies will be heading to the Wii and DS later this year, not to mention Bizarre's two other monster new games for 2007 - The Club (published by Sega) and Project Gotham Racing 4 (with motorbikes!) (published by Microsoft Games Studios)

Pervigilo 20 Jun 2007 14:05
5/5
You forgot VAT that gets added. Came to Ł1.52 via PayPal, so that's "not-quite-as-cheap-as-chips" or perhaps "cheap-as-chips-if-you-have-a-pickled-onion-with-them".
Posting of new comments is now locked for this page.