Not a wee Wii in sight 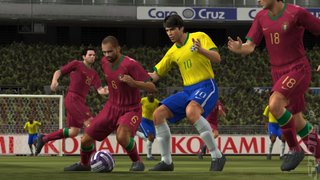 All Images (7) »
Konami, not wanting to be outdone by EA's recent announcement of FIFA '08, has just unveiled Pro Evolution Soccer 2008.

?Key to PES 2008 is a proprietary adaptive AI system entitled Teamvision. Unique to the Konami game, Teamvision is a sophisticated AI programming that learns and adapts according to an individual?s style of play. As such, it will learn new ways to build attacks and to counter specific movements and previous attacking or defensive errors, ensuring games are more in line with the tactical but flowing nature of the real thing.?

If that read as something akin to 'blah blah blah bleurgh', you're just not a soccer-kicking, videogame player - allow SPOnG to translate: the AI's clever. Konami also says that the whole game has been ?reworked and fine-tuned?.

PS3 and 360 owners will benefit from a substantial edit mode, with ?full facial animation and... high-definition detail?.

The game will be released this Autumn for the PS3, 360, PC, PS2, PSP and DS. Eagle-eyed footy fans will spot that the Wii is noticeably absent from that list. SPOnG got to wondering whether Konami's doing an EA and holding back a Wii announcement that's chock-full of exciting motion-sensory goodness. Alas, it seems not. ?Pro Evo is announced for those formats and that's it,? a representative told us.

If you can think of a single good reason for PES 2008 not getting ported from the other platforms, as has been done with just about every other big multi-platform game since the Wii's launch, please let us know in the Forum.

Shingo ?Seabass? Takatsuka, creator of the series and Producer of PES 2008, doesn't seem too worried about the game's lack of a Wii version. ?We have taken a long hard look at what has made the Pro Evolution Soccer series so popular, and where we want to take it next,? he said. ?With the new Teamvision AI system, we truly believe that we have elevated the game to a new level. The movement of players off the ball, coupled with the total control given to the player, creates the closest simulation of real football to date. We really hope everyone enjoys our evolution. I promise it will be worth the wait.?

Joji 18 Jun 2007 13:23
1/5
Truth of the matter is, Konami don't like working with Nintendo home consoles. Look back and see how many games they released on GC , I only recall Twin Snakes, which wasn't even a new game (while I know some stuff didn't reach the west). This has concerned me for ages. The last time they tried a decent effort was on N64 with two good ISS games and Hybrid Heaven, perhaps getting burned by two bad Castlevania's put them off such commitment.

Konami are doing the same again with Wii. The ommision of a Wii version says enough to me. Konami can't be bothered to work with Wii. PES 08' is a football game, a simple game that we all know the Wii could handle better than PS2 even, but still no Wii version, that's just shocking (more so with Wii now getting online). Makes them look really sad, when I look at what EA are doing with FIFA 08' on Wii. Kudos to EA for just bothering.

I'll maybe get a 360 version, but it all banks on if they've used a new graphics engine or still pushing that blurry PS2 crap again. FIFA 08' is still top of my list though. Konami, where would you be without us all buying ISS on SNES and N64? How they have forgotten, there might be no PES without ISS.

It should be interesting to see how many games Konami have lined up for Wii at EFE. My bet is some on DS and next to none on Wii. Lol, also makes me wonder what they are gonna do with PS3 currently selling badly, when Wii is where the money is at.

Bill 18 Jun 2007 13:28
2/5
Firstly, lets not forget that one of the finest iterations of the franchise was the one that came out on the GC - even though it was only released in Japan.

Secondly, Mortal Kombat Wii and Mercury Revolution have recently both shown the potential way of the future..... Classic Controller functionality!

Joji 18 Jun 2007 13:48
3/5
Yes Bill, but I still don't undertstand why the last Pro Evo/Winning Eleven on GC didn't see a u.k/euro translation. This is england and we love football, so that again is a headscratcher.

Now there's no Wii version which is pathetic, many do forget about the classic controller and I don't see why. If Nintendo are giving developers/publishers the options of other controllers, why aren't they using them? Wii is not just about the Wii controller but the others too.

Perhaps some help from Nintendo is needed here, for them to advertise the classic controller as options more. Placing something on the game cases saying, 'can use with this but best played with this one' would help.

Luckily for me, I still have my GC so I can use that pad when I get my Wii. Still no excuse for Konami to snub Wii this time though.

Dajaxman 18 Jun 2007 18:21
4/5
I really do hope this is a step up in the grx department for the 360 coz i was bitterly disappointed with the last one even though it was a step up from the last release

joe 1 Jul 2007 13:12
5/5
so is it coming for wii or not if not then why because if they cant create a motion version of the wii they could just have the wii gamers pressing buttons throughout like all the other consoles i've waited for a nintendo version soooo long alwayz had to play it on ps or xbox now that it was finally coming on wii its not omg.
Posting of new comments is now locked for this page.