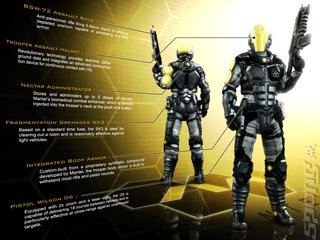 "Which way to the party?"
Following the Ubidays press event Ubisoft has really been ramping up its promotion of the upcoming shooter Haze. Today, it turns out, is no exception. The publisher has just released this video developer diary featuring David Doak, the beardy elder statesman of the game's developer, Free Radical, talking over some juicy tidbits of in-game.

In the footage Doak (is it wrong that he reminds SPOnG of Bill Bailey?) illuminates the game like a neon stick at a European rave, telling us, "...in Haze we're trying to examine more the feeling of the soldier. If you're fighting in a war, you need to somehow justify your actions, so in Haze we actually cause the player to question that to some extent."

SPOnG recently got up-close and personal with Haze. You can find out what we thought here, then head over to SPOnG's dedicated game page for more haze news, videos and assets.

Joji 13 Jun 2007 16:14
1/2
This game is another freaking awesome title to buy, so much damn good stuff on the way, my wallet is really feeling the wack. I'm considering fasting so I can get my fix.