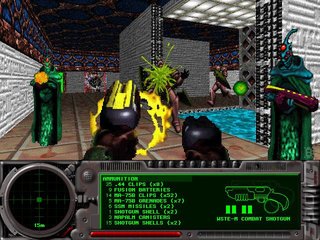 Marathon: Durandal may be heading for Xbox Live Arcade. Speculation that the title might be making its way to Microsoft's download service arises from a listing with the USK, (Unterhaltungssoftware Selbstkontrolle) Germany's equivalent of the U.S.A.'s ESRB (Entertainment Software Rating Board) and the U.K's BBFC (British Board of Film Censors)...phew... and the European PEGI (PEGI Pan European Game Information) system...phew again.

It may come as a shock to many to find that there was a time in Bungie's history before Halo, but there was. Indeed, SPOnG's very own Gareth has fond memories of a time in his life when his friends were deserting him in droves and his job was at risk, such was his addiction to Bungie's sci-fi shooter. He happily informed us:

"The first Marathon game I played was Marathon 2 Durandal, and it didn't take long for me to notice it was something special. In a world of Doom-clones, Marathon put an interesting carrot on the end of the stick - an intriguing back story that was revealed as you played. Through computer terminals about the massive spaceship Marathon, you learned the events that preceded your current predicament - an alien invasion and rampant artificially intelligent computers. Strong narrative like this set the standard for Half-Life and, of course, Halo."

SPOnG contacted Microsoft for some confirmation to make our Gareth's day, but was told, ?We can't comment on rumour and speculation.??

In other Xbox Live news, Mad Tracks ? which was ranked Number 2 in the Xbox Live Top 10 last week, is set to get patched today. An error has been stopping some players from progressing through the game - as gamers who played the demo and then unlocked the full version still only had the demo after paying!

config 13 Jun 2007 14:23
1/3
Can I just point out that;
1. I don't have an Xbox, so a confirmation or denial of XBLA Marathon would neither make or break my day.
2. PC and Mac owners can already download Marathon Open Source for FREE.

just figured i should note!

PreciousRoi 8 Aug 2007 21:01
3/3
confirmed, its up...cool to be able to play with the troller on the telly
Posting of new comments is now locked for this page.