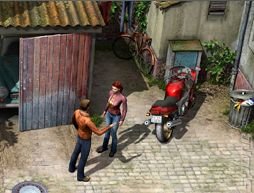 All Images (2) »
Koch Media is set to update its PC adventure game from last year, bringing Secret Files: Tunguska to Nintendo DS later this year and Wii early next year.

10Tacle Studios Mobile is developing the DS version while Keen Games is putting together the Wii version, with controls being optimised for the Wii Remote and Nunchuk.

The story in Secret Files: Tunguska starts with a mystery: when scientist Vladimir Kalenkow vanishes into thin air, his daughter Nina's world is turned upside down and she decides to investigate her father's strange disappearance. Nina meets Max Gruber, one of her father's colleagues and the two of them follow a lead to a mysterious disaster zone in the Tunguska region of Siberia which Vladimir Kalenkow had been studying. Thus the adventure begins...

Alexandra Gerb, Managing Director of 10Tacle Studios Mobile seems quite chuffed about all this, saying:
"Secret Files Tunguska is one of the most successful adventures of recent years. We are happy that we can bring this gaming adventure to a new platform by developing a Nintendo DS version and that we can also enhance it in a useful way with our innovative touch screen control."