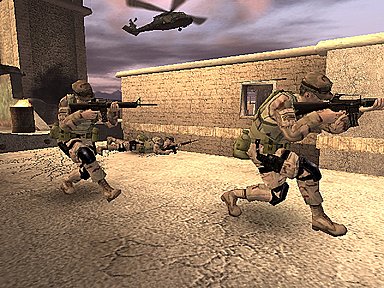 Shot from Rise of a Soldier - the previous version.
Ghost Recon: Advanced Warfighter 2 developer, Red Storm, is bringing America's Army: True Soldiers to the Xbox 360 this September - and it's going to be an exclusive.

In case you hadn't realised, America's Army: True Soldiers ,is officially sponsored by the U.S. Army, and has been used as a recruiting tool. Now, whether this means that you will learn how to quickly invade a country under orders from a set of Neo-Conservative poli-theologians who accidentally forget to produce an Exit Strategy; or whether you'll simply land on a beach on in Grenada - we've yet to see.

Of course, we're being trite and facetious. Oh, yes we are.

Apparently True Soldiers runs on the GRAW 2 engine. According to a recent interview with Red Storms Randy Greenback?, you can build your soldier in single-player, choosing one of five roles (Rifleman, Grenadier, Automatic Rifleman and Sniper). Once you've sorted your grunt out, there are eight online maps developed by Red Storm under the guidance of the U.S. Army.

When asked why the game was going to be 360-exclusive, Randy responded: "There were a couple key factors that led us to the decision to go out on the Xbox 360. First and foremost our experience level on the 360 is much higher, having gone through the development of GRAW and GRAW2 multiplayer. The second factor is that the installed base is much larger, which translates to a greater opportunity for a wider audience to experience the game."

We'll give you our take come September when we get our hands on a copy.

hollywooda 13 Jun 2007 08:57
1/2
The Strength of XBOX Live has a lot to do with this being an exclusive for the xbox. MS done well to see that online play was gonna be a big part of the next generation of gaming, seems games developer have pick up on this too....