Watch out, they're in disguise don'tcha know 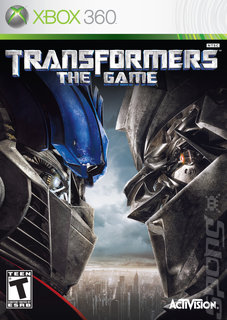 There's little that gets SPOnG's juices flowing like a robot disguising itself as something vehicular. It was with no small amount of excitement, then, that we opened up this new Transformers trailer when it hit our inbox courtesy of Activision.

Granted, it seems there's a giant-roboty game finding itself on European shelves from Japan about once a week these days (e.g. Wartech Senko no Ronde), but this is Transformers! SPOnG just hopes that the new game and film can stack up against the '80s giant that was Transformers: The Animated Movie. Granted, Activision and Dreamworks have Peter Cullen reprising his voice-acting role as Optimus Prime, but can they match a stellar cast that included Eric Idle, Orson Welles, Leonard Nimoy and Judd Nelson?

SPOnG recently took you behind the scenes of the game's creation, the footage of which can be found here.

If that's not enough to sate your appetite for things that are More Than Meets The Eye, head over to SPOnG's dedicated Transformers game page.

hollywooda 13 Jun 2007 14:21
3/3
The lastest trailer i saw looked amazing just hope they done a good job with the storyline & its not just all CG.
Posting of new comments is now locked for this page.