EA and iD Software step up at Apple conference 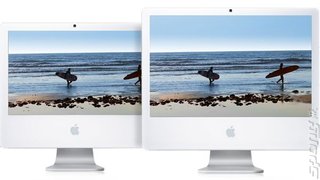 The advent of this year's Apple Worldwide Developers Conference has teased some promising gaming announcements out of the woodwork. EA has announced that it will be bringing several big (not to mention recent/unreleased) games to the Mac using TransGaming's Cider engine; while id Software has shown its support for Apple by showing off a new engine at the event.

First up, then, is EA's announcement of its Cider-driven Mac releases. Harry Potter and the Order of the Phoenix, Madden NFL 08, Tiger Woods PGA Tour 08, Need for Speed Carbon, Command & Conquer 3 Tiberium Wars and Battlefield 2142 will all be brought to the Mac this summer, with more titles to follow.

The Cider engine will be used to circumvent the usually substantial lag-time between other-platform releases and the Mac that results from having to re-write the code. The engine's designed to ease the transition of code from its native platform to Intel-powered Macs.

"Leveraging TransGaming's Cider technology to bring our hit franchises to Mac users is an exciting first step in delivering the video game experience that Mac users deserve," said EA's vice president Scott Cronce,. "With the launch of these titles, it truly is the best time to be a Mac gamer."

Coming from Apple CEO Steve Jobs' keynote was a first peek at Doom-developer id Software's new game engine, called id Tech 5. id's lead programmer, John Carmack, was brought out to show off the new engine on Mac hardware and confirmed that the studio is working on a new game based on it. Carmack explained:

"So the last couple of years at id we've been working in secrecy on next-gen tech and a game for it. This is the first time we're showing anything we've done on it publicly.

"What we've got here is the entire world with unique textures - 20GB of textures covering this track. They can go in and look at the world and, say, change the color of the mountaintop, or carve their name into the rock. They can change as much as they want on surfaces with no impact on the game."

id Software's website confirms that the technology will be available for license by third parties and gives a bit more of the technical gubbins:

Carmack confirmed that the engine will be shown off on the Mac, PC, 360 and PS3 at E3.

While we're on the subject of Apple, SPOnG thought we'd share a bit of iTunes/Nintendo goodness with you. We already told you about a couple of applications that will allow you to stream content from your PC directly to your Wii, but now hackaddict.net has a step by step guide to getting iTunes onto the platform for free, as well. Follow the link and let us know how it works out in the Forum.
Companies: Apple Electronic Arts id Software
Games: Battlefield 2142 Command & Conquer 3: Tiberium Wars Harry Potter and the Order of the Phoenix Madden NFL 08 Need For Speed: Carbon