Which songs will you virtually rock out to this Christmas? 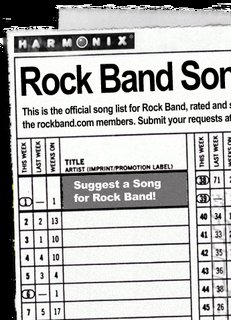 Awesome! Just as SPOnG is arguing and a-bickering between us about what songs we want to see in Harmonix’s Rock Band later this year, and Guitar Hero III whenever that comes out, the dudes at Harmonix manage to figure out a way of allowing us all a say in what will make it onto the game’s final set-list.

Or if not into the initial song-list, then perhaps your requests might still make it into the inevitable downloadable song packs which are sure to be regularly released to keep the game fresh and interesting, as with the glorious Guitar Hero II on Xbox 360.

Anyway, we’ve stopped bickering between us now as to whether or not the Happy Mondays were better than The Stone Roses and which of the two bands' top tunes would make ideal fodder for the next big Rock game (for the record, it’s The Roses) and instead we’ve done something more productive – we’ve told Harmonix about or dream wish-lists via Rock Band’s official website (set list request chit, pictured right).

So go on then – pop over to the game’s official site now - and give Harmonix the four tunes that would rock your tiny mind when you get to play Rock Band, either by yourself or with up to three of your mates backing you up, this coming Christmas.

Then, if you’re in an argumentative mood, you can post your top four most-wanted Rock Band tunes in the forum below for others to gush in agreement with your impressive musical taste, or mock in utter derision should your top four include ‘an ironic choice’ from any band ever produced by Stock, Aitken and Waterman in the 1980s.

Mebbe should've read 'I vote for Juicebox by the Killers (or whatever they're called, erm, The Strokes, yes, that's them la'. *Scratches nuts, belches)'.

Anyhoo, 'All The Young Dudes' by Mott the Hoople