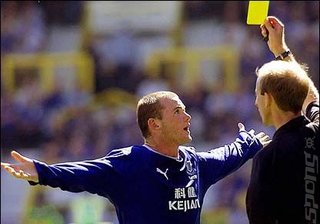 Wayne Rooney in traditional blue... and yellow.
All Images (8) »
With the football/soccer season about to end (in Spain, because we know that the English season finished with the play-offs) Electronic Arts has bent in some fresh new screens for FIFA '08 - due out late this year - from just outside the Xbox (360... and the PS3).

From the English point of view, two shots of a portly gentleman attacking one headless Chelsea and one torso-less Chelsea player could suggest that the Portugese nut-cracker, Wayne Rooney, may grace the cover of the local FIFA '08 cover.

Of course we'd be jumping to conclusions as Rooney's team mate, Cristiano Ronaldo, is our bet for the cover. Of course, resurgent ex-Manc' star, David 'Sir' Beckham is now also in with a chance. Whichever way you look at it, the cover will be graced by someone from Manchester United, Arsenal or Chelsea - and we'll go to the local Maltese bookmaker with that and the mortgage on SPOnG HQ. The obvious choice would be Bristol Rovers' star striker Richard Walker - but we can't see that happening as the world is a dark and unfair place populated by bandwagon-jumping glory hunters.

Fortunately, SPOnG's favourite soccer-kicking star, Franc 'the looker' Ribery is also featured. At least his arse is prominent (well, we think it's his arse) in an all-action free-kick shot with the glorious Franc shooting his best against what looks like Middlesbrough.

Come on, who's really cares who's on the game sleeve?

I think you'll find that the features within the video game cannot possibly change (enhance or degrade) the beautiful game unless - for example - FIFA decides to opt for 10 minute halves and two dimensional players.... well, we've got the latter I suppose - I mean Beckham can cross a ball and sign a ball. Gerrard and Lampard can both fight over a ball and miss a passing opportunity... I could go on.

Joji wrote:
Come on, who's really cares who's on the game sleeve?

Yeah, no one does. Note to EA: put Gary Sprake or Keith Weller on the cover of FIFA '08, no one will notice.