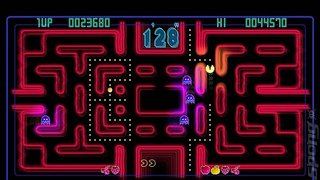 Pac-Man Championship Edition, which hits Xbox Live today, will not just slap a high-definition gloss onto the retro classic, according to Microsoft. Instead, fans of pure eighties goodness can expect the first new mazes to come from the game's designer, Toru Iwatani, in two and a half decades.

Not only that, but players will also get some new gameplay features thrown in to sweeten the pot. For starters, you'll find the mazes in widescreen with roomier pathways to enable faster play. Perhaps more importantly, you'll find that mazes change shape during gameplay, adding a new dynamic to the familiar pellet-chomping formula.

Championship Mode, which was designed specifically with the Pac-Man World Championship in mind, is the meat of the game and sets players off with regenerating dots and a five minute time limit. A special mention goes to Darkness Course, which only illuminates the area directly around the chompy guy, and to the Freeway Course, that sees you munching around at super high speed. In addition to the modes already mentioned, there are three others to sink your teeth into.

Alas, there's no multiplayer mode on offer, so you won't be able to whup your Dad at what he considers to be a real game.

Pac-Man Championship Edition is available for download today at a cost of 800 Microsoft Points.