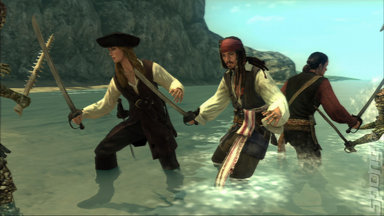 Avast and all that
Spidey has finally been dislodged from the dizzying heights of the top of the charts after a solid four weeks at the top.

It's Disney's Pirates of the Caribbean: At World's End that's sailed into the top spot, proving that a huge blockbuster movie and a game that spans every platform on the seven seas is, as SPOnG suspected, enough to earn a place at the top. Captain Sparrow and crew benefit from an impressive 83% sales increase on last week.

SPOnG's a little bit sorry to note that six of the last eight weeks have now seen a movie tie-in at the top of the games chart. Pirates joins the aforementioned Spider-Man 3 and Teenage Mutant Ninja Turtles on the list of chart-topping film spin-offs.

Lara Croft misses out on on the top spot, with Eidos's Lara Croft: Tomb Raider: Anniversary hitting the charts at Number 2. If you're thinking about chucking your Ł30 into the 'get Lara to the top' pot you can have your opinion informed by our Gavin here.

Number 3 is the spot where Activision's Spider-Man 3 hangs after tumbling a couple of places.

Nintendo still enjoys its position as the most represented platform holder in the Top 10. Mario Strikers: Charged Football for the Wii drops one place to Number 4, while Wii Play holds steady at Number 6. 505 Games' Cooking Mama for both the Wii and the DS simmers behind it at Number 7 after climbing from Number 10, with Brain Training for the DS still haunting the Top 10 at Number 8.

The highest new entry after Tomb Raider is Microsoft's Shadowrun at Number 11, which no doubt benefits from being the first title to feature cross-platform multiplayer between Xbox Live and Live for Windows. Spongebob & Friends: Volcano Island also makes its first appearance in the Top 40, with the spongey one soaking things up at Number 14.

Cap'n Jack's big screen reappearance also benefits the budget-priced Pirates of the Caribbean: Jack Sparrow on the PS2 and PC, which swashes back into the Charts at Number 23.

OptimusP 6 Jun 2007 09:58
2/2
I'm geussing some people will buy Halo 2 to do ceremonnial burnings with it to please the gaming gods that Unreal 2007 will not be some console-like watered down FPS-game.

In any case, a game to download after downloading Vista (legally do mind!).