But the old stager is still being made... 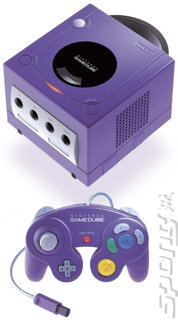 The GameCube: an arty door stop?
It wasn't just Spidey's stickiness that caught SPOnG's eye this morning when the Charts hit. The full-price GameCube and full-price Xbox charts are no longer being covered by Chart-Track, which supplies games market statistics for the UK.

SPOnG spoke to Chart-Track, which confirmed that both charts have been dropped. A representative explained, ?There's just not enough titles selling any more to warrant doing those charts.?

The disappearance of the Xbox chart will raise few eyebrows, since the hardware has been out of production since 2005, Nintendo, however, remains adamant that it still manufactures the GameCube.

SPOnG contacted Nintendo to find out whether the lack of sales activity that prompted Chart-Track to drop its GameCube full-price chart listing is enough to stop Nintendo supporting it. We were met with, ?We are still producing GameCube hardware and software - all you can read into that is that Chart Track are not covering GameCube charts any more.?

We're still a little bemused as to why Nintendo - which is having problems manufacturing sufficient Wiis to fulfil the enormous demand - should still be making the older machine. GameCube games can be played on Wii - and fabrication of the 'Cube could be turned over to Wii. But, frankly, right now Nintendo is getting things right, so we'll wait and see.

Do you ever dust off your GameCube and eagerly scout the shelves of your local games retailer for new releases? Answers in the Forum, please.
Companies: Microsoft Nintendo

headcasephil 30 May 2007 11:32
1/7
Do you ever dust off your GameCube and eagerly scout the shelves of your local games retailer for new releases? Answers in the Forum, please
fist of all were can you buy a new gamecube in all the shops in 3 towns and 1 city the only gamecube hardware that you can buy is used same pretty much with the games the only new game that you can get is zelda and don't need that as i have got it for the wii. secondly the only bits of the gamecube i use is the controller's and the mem card other than that my gamecube is a nice deplay on my self one black and the other purple the only thing that i would buy now a days for the gamecube is a bargain bucket game if i was on a cheap week and the funds were not there for something new

1) When I wanna play any of my import GC games.
ie: Most of them.
Until Datel make an Action Replay that works on the Wii (the variant I have doesn't) then that is my only option.

2) When I wanna play a GBA game on the telly. Lovin my little GB Player see...

I rarely shop for games but if I see a bargain I'll pick one up. Metroid for a fiver being my most recent purchase...
Want Battalion Wars....
Any suggestions folks?

Joji 30 May 2007 12:59
3/7
I'm keeping my GC for my collection. Besides I too will need my pads for my Wii. There's still a lot of good import games for GC, so since I have a freeloader I'll be checking those out. We all know GC will still be getting games in japan.

That may be down to a 50Hz/60Hz configuration conflict though. Are gamecube games emulated on the Wii? Or is there a gamecube chip? I'd guess the former, from my problem.

soanso 30 May 2007 15:20
5/7
My Gamecube never got put away. It's impossible to sell them now too. Just go and look at how much they sell for on Evilbay. You'd spend more money on posting it!
There's still a few games I'd like to grab for it too.
My local shops were always pretty rubbish for GC games but I see some stuff listed on various sites that I'll go check out soon.

And I'm still not gonna buy Zelda TP for Wii no matter what!

config 31 May 2007 10:30
6/7
My GC is still sat in the home ent unit, but hasn't been touched for months. It makes a useful dust magnet. Last time it was used was when my 4 year old daughter wanted to play Donkey Konga.

Last time I used it was to play Geist, which completely corrupted my memory card taking out my (almost complete) save for Metroid Prime 2 - which was nice.

After N64, GC and now Wii's dearth of good games for looking ominously remeniscent of those previous attempts, I have little confidence in Nintendo in the home console arena.

TheMar 9 Oct 2007 10:14
7/7
I've just bought one from Asda, with the GameBoy player and controller for Ł20.00! It's brought all my old Gameboy games to life again. Brilliant for the money.
Posting of new comments is now locked for this page.