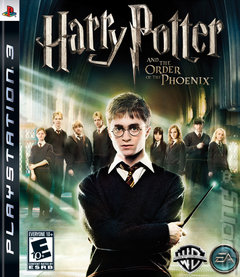 Harry means business. Word
As SPOnG noted last week, Harry Potter's growing up. As well as having strange and alien feelings towards gorgeous oriental witch, Cho, he's getting into music. To celebrate, EA's just released this video taking us behind the scenes of music production on the upcoming Harry Potter and the Order of the Phoenix.

Frankly, however, we hope Harry isn't listening to the music in the game. It's not that the tunes in question aren't good at creating an atmosphere and all that in fact, it's quite the opposite. We don't want Harry to grow up in a constant state of paranoia with all that eeriness going through his head. We reckon he'll grow up a lot more well-adjusted if he takes a look at the SingStar '90s track listing and gets himself over to eMusic he'll grow up just fine. Like us.

For more on Harry Potter and the Order of the Phoenix take a look at SPOnG's dedicated game page.

Companies: Electronic Arts
Games: Harry Potter and the Order of the Phoenix