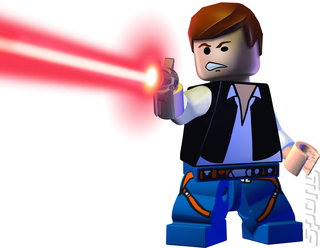 All Images (7) »
Genuinely exciting news to hear today that one of SPOnG?s favourite UK development outfits, the mighty Traveller?s Tales, is beavering away on the next instalment of one of our favourite games, with Lego Star Wars: The Complete Saga in development for PS3, 360, Wii and DS.

The game is said to feature elements from all six Star Wars movies, with plenty of new locations, characters and ? most tantalisingly ? online multiplayer elements on the PS3 and Xbox 360 versions.

The DS version of Lego Star Wars: The Complete Saga is also being totally reworked "brick by brick" which is good news for DS gamers - as the original DS version was a pretty disappointing affair. Certainly in comparison with it's beautifully executed home console cousins.

The promise that friends and families, ?spread across the world can unite to rebuild a galaxy in pieces with cooperative two-player, drop-in/drop-out gameplay,? really has got a bunch of grown men at SPOnG nostalgically dreaming of life in a galaxy far, far away?.

From the Trade Federation?s ?negotiations? with Obi-Wan Kenobi and Qui-Gon Jinn in The Phantom Menace to the space battle above Endor in Return of the Jedi, The Complete Saga will allow players to ?kick some brick through 36 Story Mode levels, including Episode II?s newly added high-speed pursuit of bounty hunter Zam Wessell.?

"As we usher in the next generation of video game consoles, LucasArts is leading the way in family entertainment," LucasArts president Jim Ward stated. "We're proud of the phenomenal success of Lego Star Wars II and how it delivered all the fun, humour and action of the original trilogy to the entire family. Now, with The Complete Saga, we're excited to finally offer the entire saga playable in one package for the first time ever."

?LucasArts was an amazing partner on Lego Star Wars II (pictured here), and working with them on The Complete Saga continues to be a great experience,? said Tom Stone, director at TT Games.

?We?re also thrilled to be focusing on next-generation consoles and creating content that plays to the strength of each system.?

What a pile of s**t! I doubt it's the developers fault, Nintendo have really cocked up with onlnie gaming. The DS, no matter how you spin it, has terrible online gaming. It's painfully slow and there's hardly any games supporting it. The Wii is becoming just as bad. Not every game needs online, but lets at least not be 15 years behind PC gaming!

zoydwheeler 25 May 2007 12:15
2/4
Methinks the lady doth protest too much! Go and play Mario Strikers Charged online tonight and then reconsider your opinion.
more comments below our sponsor's message

ShoRt4mAAgE 31 May 2007 21:22
3/4
Well i for 1 reckon that lego str wars the complete saga will b quality.....hopefully online will b K1K A55......also....it's gd there adding new lvls cos in the first lego star wars they missed half of ep II and in lego star wars II they missed loads of rly gd fights in ep V! but hopefully the complete saga will be evrythin the other 2 werent =P