Here there be stuff to save... 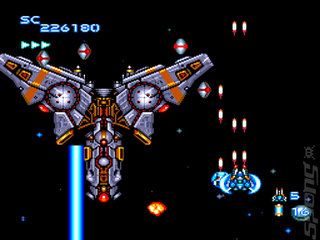 All Images (17) »
Nintendo seems to have some kind of world-saving fixation with this week's Virtual Console offerings on the Wii. Up for grabs are Super Mario Bros. 2, Mach Rider and Blazing Lazers.

Super Mario Bros. 2 started its life all the way back in 1989 on the NES. It starts innocuously enough, with Mario, Luigi, Peach (yes, we called her 'Peach', maybe we're finally caving) and Toad out on a picnic. Mario Picnic, however, wouldn't be much of a game (if we're wrong, correct us in the Forum). Fortunately, things start to go wrong when they find themselves in the enigmatic land of Subcon and have to save the world from a frog going by the name of Wart. From there, we presume, you can guess how it goes. Super Mario Bros. 2 will set you back 500 Wii Points.

If you want to pick up the pace a bit, Nintendo has 1987's Mach Rider, hailing from the NES, on offer. In the year 2112 the world has been invaded by a nasty bunch of quad bikers who are hell-bent on destruction and suchlike. Luckily, Mach Rider is on the scene to clean up. Think Knightrider mixed with dirt biking. Think 500 Wii Points.

Last up is Blazing Lazers from HudsonSoft. (Sounds cool, doesn't it? SPOnG's seeing itself on a robot horse with a phaser set 'not to stun' right now.) It's a vertical scrolling shooter in classic arcade style about... who are we kidding? It's about shooting stuff with lasers. It'll set you back 600 Wii Points.

Joji 25 May 2007 00:56
1/6
Sometime, Nintendo should look at Mach Rider again, it could make a pretty good game if they applied their talent to it today. Its also the kind of game many today wouldn't associate with Nintendo so it could play in their favour.

Mario Bros 2 speaks for itself (didn't really like it though, after I found it wans't really a Mario game).

Blazing Lazers looks great. Reminds me of Tatsujin, aka Truxton on MD.