It's Hallowe'en all year round with Ronaldinho and more caught on camera. 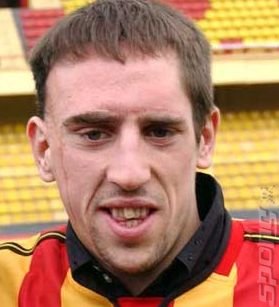 Olympique Marseille's Frank Ribery - cover star!
We all knew that FIFA 08 was an inevitability, and some of the biggest stars in world football would grace the inlay sleeve when it appears in Europe later in 2007 (go on, tell us we're not wrong). That said, the list of international clever clogs EA Sports has announced as cover stars makes for interesting reading.

The man who some regard as the world's greatest contemporary goofball - sorry, football player - Ronaldinho, is present and correct, but a chorus of "Who the f*****g hell are you?" goes out to the likes of Andreas Ivanschitz and Tranquillo Barnetta.

Some of us here are huge footy fans, and yes, we've heard - and sniggered at - their names before, but would you recognise them on the front of the box? No, us neither. And the players we do know by sight, well, they're hardly catalogue models. But worry not, you English scumbag so-called football fans, you! The selection of players announced so far is purely for mainland Europe. Say hello to the following cover stars and their respective countries:

Tranquillo Barnetta (Bayer Leverkusen) will be on the Swiss cover. 'Cos he's from Switzerland. Ronaldinho (Barcelona) and Miroslav Klose (Werder Bremen) will share the German sleeve. Let's hope it's an October 31 release for that one, eh? Sergio Ramos (Real Madrid) will grace the cover of FIFA 08 in Spain, Andreas Ivanschitz (Panathinaikos FC) is an Austrian national and will therefore feature on the Austrian release.

And finally, French duo Florent Malouda (Olympique Lyonnais) and Olympique Marseille's Frank Ribery (steady girls, he's spoken for) will join up with the ubiquitous Ronaldinho for the issue Francaise.

Electronic Arts also revealed that literally as we write this, Barnetta, Ronaldinho, Ramos, Klose and Ivanschitz are involved in the motion-capture larks that provide that oh-so-accurate body movement that you see in-game. "We are proud to call some of the world's best football athletes our partners. The access, guidance and insight they give us means that FIFA 08 will create a next-gen experience that not only looks authentic, but that captures the emotion, finesse and beauty of the game," said Joe Booth, senior producer for FIFA 08. "Through sessions like today, and the continued investment in our next-gen football engine, our world-class development team continues to revolutionize the authentic gameplay experience."

"Ronaldinho and all the FIFA 08 cover stars bring a passion for the sport that is raw and true. They enjoy helping us bring that real-world experience into the game," said Matt Bilbey, International Director, EA SPORTS. "Their expert skills, commitment to success and passion for football inspire our development team and help us make FIFA 08 the most natural-feeling football videogame in the world."

Hey! Who's gonna star on the cover of the UK release of FIFA 08? The SPOnG kitty is on THE best player in the world and easy pushover Cristiano Ronaldo, especially as all the Liverpool players ran out of steam last night in the European Cup final.

(Maybe EA's arch-rival in the soccer-kicking stakes, Konami, will have forgotten how the Reds had the stuffing knocked out of 'em with a soft free kick by the time the next PES cover stars are ready for selection.)

FIFA 08 is due for release on every format imaginable - and possibly some you've not heard of as yet - sometime later this year. Fingers crossed, we'll be able to bring you some hot photos from the motion-capture sessions later today.

Showing the 20 most recent comments. Read all 32.

Svend Joscelyne 25 May 2007 10:02
13/32
And again, I can't believe people are taking this article very seriously at all.
Jeez, I thought gaming fanboys were bad.

micta 25 May 2007 13:32
14/32
Jackson Capper wrote:
I could barely understand a single sentence in this article. I can't believe stuff of this quality actually gets published on the web.

Thankyou boyo! That's the kindest thing anyone's said to me for years. Honestly, you f*ck one sheep...

That includes Chelski, Liverpool and Man Utd, you buffoons. We like proper football up here - none o' that fancy, high-priced nonsense that you call the Premiership, Champions League etc.

what a complete knob head
Hit the nail right on the (knob) head there, son.

Svend wrote:
Sorry, but I lol'd.
Svend is from Southend

Joji wrote:
the future's so bright i gotta wear shades
JFC!! Show me the way to the vomitorium

He, like me, is someone who has travelled home and away on Wednesday nights to see his team - in his case Huddersfield Town - play football. He's a writer who contributes to the sound and the atmosphere that armchairs pay for and then moan about.

He is a writer.

Svend Joscelyne 26 May 2007 22:14
21/32
OK, at first I thought it was quite funny how there has been so many people with a twig up their arse about an article that says something of an opinion of football on a gaming website. Blimey. Someone said Ronaldo was the best player in the world. Who cares? Someone called Liverpool crap. Cry me a river. If you want to go to a website for football news, go to the BBC Sports site or something.

You know, I'm starting to actually think that it's just one or two individuals constantly posting the same comments making it look like loads of people.

Either way, complaining about the article in this context is lame. Konami Code reveals: the real story was about FIFA announcing their new cover star players.

Trident 27 May 2007 08:17
22/32
American Football sucks, the stupidest sport ever. It should be banished cause people are getting stupid just by watching it.

PreciousRoi 27 May 2007 21:16
24/32
anonymous asshole wrote:
American Football sucks, the stupidest sport ever. It should be banished cause people are getting stupid just by watching it.

another, possibly the same anonymous asshole wrote:
It's REALLY stupid to call a "American football" the game, where you are not playing with your foot. And say It is better than REAL football.

Anonymous posts suck. worst. thing. ever. I feel like I get stupider just reading them. Why exactly were these implemented or felt to be necessary? Been holding back on this thought since their introduction. If this was a trial, I'd consider it failed, most of the anonymous posts are crap, and the few that aren't should have been encouraged to register. Not even implemented well...on the OP they have screen names, but when you reply it says anonymous, kinda hard for someone to know whos being replied to sans context.

Where was American football even referenced? Or could you just not resist the temptation to spew forth random crap?

DoctorDee 28 May 2007 08:09
25/32
PreciousRoi wrote:
Anonymous posts suck. worst. thing. ever.
The bring their share of dross, it's undeniable. But they have also resulted in some pretty good posts, take the GAME/GameStation thread, for instance.

Not everyone who reads the site is prepared to invest the time and effort (and percieved risk of spam) that registering involves. Often those people have interesting opinions, and we want to hear them.

True, it lets people with no opinions worth reading espouse said lack of opinions. But where there's an up, there's usually a down. On balance, we don't think we're flooded with crap yet.

The unusually disappointing responses to this story come because Micta wandered (purposefully) onto a subject about which it is impossible to express any opinion in the UK, without seriously upsetting some neanderthal f**ktard.

And several things that both have in respect to cricket or chess.

It is indeed a f**king pisser when the anonymous voice themselves, they so rarely agree with one's outlook. It makes one feel so compromised in one's security.

I think I shall lie down with some milky tea and my comfort monologue.

And several things that both have in respect to cricket or chess.

It is indeed a f**king pisser when the anonymous voice themselves, they so rarely agree with one's outlook. It makes one feel so compromised in one's security.

I think I shall lie down with some milky tea and my comfort monologue.

Schmidt! Three days have passed and no comment on the glory of Gas from last weekend. Where are yer!?

Totally, completely and utterly (well, if you disregard the fact that it had been talked about while I was still sunning myself on Sydney's Clovelly Beach).

I still think it's a good idea. Okay, so we get dreck but we also get some decent new contributions to many threads (Pat Brown, the U.S. profiler, for example). Forums are supposed to be locations for debate. Debate includes differing opinions and also, sadly, noise generated by the less articulate in the world.

That said, the inarticulate can also cut through pomposity and 'holy writ'. It's up to the rest of us to deal with the noise.

And let's face it, we've seen badly formed, almost incoherent posts from fully (un)paid-up members as well in the past.

I decided to keep the fact that I am currently still drunk on the first real Wembley success by any team since 1972's Watney Cup victory to myself.

Far be it from me to inflame the kind of idiots who believe that the likes of Cristiano Ronaldo, Steve Gerrard, Thierry Henry and John Terry are any more than journeymen hacks in comparison to Bristol Rovers' Sammy Igoe and Richard Walker - but they are.

But seeing as you asked... I am looking forward to seeing the mighty Memorial Stadium modelled in its new beauty in FIFA '09 and PES 7. This will enable me to use my unmatched console footy gaming genius to defeat all-comers as usual.