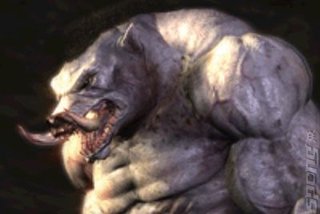 Duke Nukem (taking) Forever?
According to a job ad?, 3D realms is on the hunt for junior and senior programmers.

Yes, yes, another day, another game company looking for staff. No biggie. The difference here though, and one that will surely get Duke fans frothing at the mouth, is that the posting includes an in-game shot of a piggy.

According to a post by 3D Realm's George Broussard the on company?s forum, the shot is a "real-time in game asset taken from a game level with a dark background, on purpose, because we wanted to focus attention on the character."

With official StarCraft 2 details and a Duke screenshot coming out in the same week, it?s a miracle there hasn?t been an internet meltdown yet.

Hopefully when the new programmers get settled in they can help speed up DNF development so we can actually play it before our grandchildren do.

Serious Sam 3 out soon?
In other shooter news, Croteam (the developers behind the surprise smash Serious Sam series) has released some dazzling early screenshots of a technical engine demonstration put together for id Software. The shots have been taken from an eight-page special on the developer in Croation Gameplay Magazine. According to the fansite (which translated the article) it claims the shots are from Serious Sam 3 and an upcoming as-yet unnamed tactical shooter.

The magazine says work is well underway on the third part of the series, and that an official announcement will be made shortly.

V-Tech Rampage
It was only a matter of time really, but taking a page out of I?m OK - A Murder Simulator and Super Columbine Massacre RPG?s book, an Australian/American gamer by the name of Ryan Lambourn has put together a three-level flash game based on the Virginia Tech shootings in America.

To the tune of Collective Soul's Shine players take control of Cho, commit the first murder, post promotional materials to CNN, dodge police then finish up his tragic spree by killing (or wounding) every person in the building.

Naturally the game has prodded the predictable responses. Some appreciate the puerile humour and internet memes Lambourne deploys (V-tech?s kicked in yo?, kekeke), while most denounce it as a clunky attempt to piggyback on the tragedy.

Unlike I?m O.K. and SCMRPG though, for all the controversy the game has stirred up V-Tech Rampage lacks any real polish, sophistication and social commentary to help defend against criticism.

Lambourne, who goes by the name ?PigPen? on newgrounds.com where the game was published, is unconcerned by the negative press though. Even after his service provider dumped his site over complaints about the game.

?LOL my site is down because they got too many angry emails and they won?t put it back up with vtech still on it,? he writes on newgrounds.com. ?At least Newgrounds still believes in freedom of speech, thanks.?

Free speech of exploitation? Is it too soon? A case of talent gone astray? Tell us what you think?

Second Life Getting Sky Upgrade
Finally this week, Linden Labs has announced that it will soon be adding more realistic clouds and atmosphere to Second Life after purchasing both the 3D cloud simulator Nimble, and the atmosphere rendering engine Windlight from Windward Mark Interactive.

The addition will help create more realistic environments within Second Life, further decreasing its inhabitants need to go outside and see real weather.