Music gives the game away? 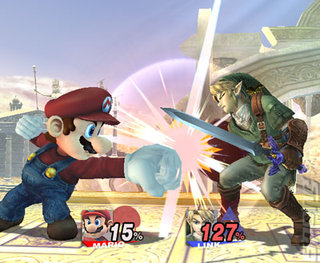 All Images (8) »
The official website for the Wii-bound Super Smash Bros. Brawl, dubbed Dojo, has been relaunched with a handful of tantalising teasers.

Speaking about the list, Masahiro Sakurai, the game's director, said, ?This is dangerous. It's a little risky... We've asked our group of arrangement supervisors to listen to an elite selection of Nintendo music and asked them to arrange several of their favourite songs.?

Of course, contrary to Sakurai's specification of ?Nintendo?, the more sensationalist among us might want to string the facts together for a touch of speculation. We've got Akihiro Honda, the maestro behind Metal Gear Solid 4 on board, and Snake appearing in the game. Is it such a stretch, then, to presume that perhaps, say, Yoko Shimomura's involvement could mean we'll see some Square Enix characters popping up?

Or, even better, could Tomoko Sasaki's involvement mean we'll see Sega characters turn up? Mario & Sonic at the Olympic Games is less than seven months away, after all...

One thing that might be of concern is that the American and Japanese websites both show a release date of 2007 for Smash Bros., while the European site is noticeably bereft of any detail in that department.

Beyond the list of attached musicians, the site features a gameplay guide, a poorly populated level guide (it has one level), and the screens below. You can see the site (and listen to a snatch of the game's musical score) here.

realvictory 22 May 2007 18:10
1/1
If it does have all these characters in, that is probably going to be the one thing that makes this version amazing.
Posting of new comments is now locked for this page.