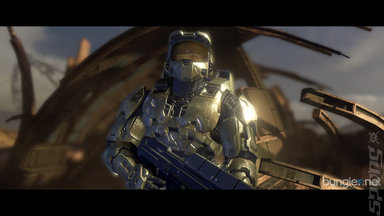 All Images (4) »
Halo 3 will feature a four-player cooperative mode, according to hackers. According to Bungie and Microsoft, well, they don't comment on this kind of thing.

Bear in mind the huge caveat posted by a hacker and self-confessed Halo fan calling him (or her)-self, 7th Columnist, that was posted following an indignant posting wave. "I shall state? this is not an official announcement. I am merely reporting what we have found in the code. It?s all in there, but as with anything, the final release may differ."

While digging around in the source code of the Halo 3 beta, the crafty code miners supposedly found the following message:

The game cannot start because all players are set to observer. Too many players for splitscreen. Only 2 players may play splitscreen coop on the same Xbox 360 console. The party size is too large to start the game. Up to 4 players may play coop on Xbox Live or System Link. Loading information from Xbox Live...

The idea that the code is "all in there" is also open to question. Remember that this was beta code under scrutiny. So, this may well have a deal of dead ends, red herrings or even code left over from "that seems like a good idea" sessions. Therefore SPOnG is far from convinced that any 'discovered' code indicates anything more than the fact the it exists in a beta that was bound to be hacked by an Xbox community that loves modding.

SPOnG contacted Microsoft for for confirmation of the co-op mode but was met with, ?We can't comment on that.?

As well as the alleged four player co-op mode, several new weapons and vehicles have been found along with a list of the available game modes. New weapons include the Excavator and the Gravity Hammer, while the Hornet and Chopper offer you new ways of getting around. As for the list of gameplay modes, cast your eyes downwards for the unabridged list:

SPOnG's retaining a healthy dose of scepticism at this point, lest those cheeky hackers are yanking our chain, but our fingers remain crossed that we will see this stuff turn up in the final game.

For all the latest on Halo 3 check out SPOnG's dedicated game page.

Ferris Fairbairn 4 Jun 2007 08:31
1/1
Hi as you can see there are two e-mail addresess so if you just want to send me a message then please send to Fairbairnfe@yahoo.co.uk but if you would like to add me on msn then use the other one (i highly doubt you have time to add me lol)

when i got to the end of your artical i just wished there was more for you to say but obviosly there is a limit in what you can find out. If i find out any infomation i wil send it to you because i know someone that has a dad that works with microsoft and help now and then with Halo. they have got the halo 3 alpha version as well, i will keep you posted.

p.s my xbox live account name is Fez127 so you can add me on that if you want but it could be a while before i accept you becaue im moving to New Zealnd in two weeks and i am very busy with exams and packing lol