Ubisoft On EndWar: Video Inside 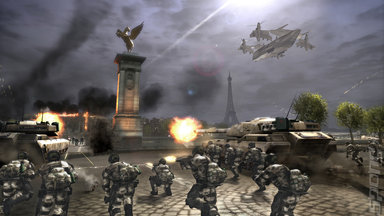 All Images (3) »
Ubisoft has spilled a few more beans on the upcoming Tom Clancy's EndWar, as well as dishing out a few choice pieces of footage. The details come courtesy of the video interview below between the game's creative director, Michael Deplatter, and one of Ubisoft's team of girl gamers, the Frag Dolls.

Among the tidbits that Deplatter lets loose is the fact that EndWar will be multiplayer focussed, so ?...any mission, and battle that you go into, you can play it single-player, you can play it co-op against the AI or in multiplayer.? Beyond that, however, online multiplayer will feature an MMO-style element of persistent gameplay that will allow players to join one massive, truly global war to end all wars.

All that and, of course, some footage from the game can be found below. When you're done watching it, you can head over to SPOnG's dedicated EndWar game page for more.