Get your lycra on 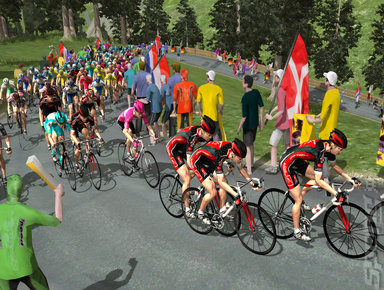 With uber cyclists Greg LeMond in court battle with Floyd Landis (including an "anonymous menacing phone call" from Landis's former business manager to LeMond relating to sexual abuse) it's possible that the actual racing element of the sport of road-cycling may have been overlooked. Well, it's now time to get back to what the sport really means: managing teams of prima donnas in an attempt to get the right coloured 'jersey' on them in Paris on July 29th.

So, it's time to turn to Pro Cycling manager/Tour de France 2007 the official website and pit your wits against others both on PC and PSP.

Here's what we're told, "In Pro Cycling Manager/Tour de France 2007, players will manage professional teams (handling contracts, training camps, transfers, equipment and the media) from the pro racing circuit. During the numerous real-time competitions, players will have complete control of in-race tactics and will need to take advantage of their team's strengths to reach the best podium places. With over 60 officially licensed teams available, there's a team for every type of player."

This year will also see the first use of the famous license on a handheld gaming system, with Pro Cycling/Tour de France 2007, ported to Sony's PSP handheld console. "Far from a simple port, the PSP version of the game will offer new features and challenges for handheld gamers, including five-race seasons, single races and much more. Pro Cycling PSP aims to be a beefed-up version of the real-time simulation mode in the PC version. Players and cycling amateurs will delight in bringing together the season?s 20 official teams and their star racers for a Tour de France 2007 that is more intense than ever and, for the first time, mobile."