A world of it 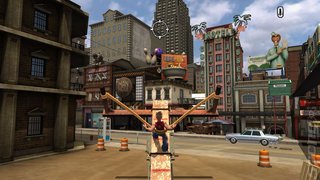 All Images (4) »
Sony showed off a new PlayStation Network title at its Gamers Day in the US, dubbed simply Pain.

The game comes from developer Idol Minds, of Coolboarders fame. It revolves around the beautifully destructive premise of catapulting a chap around a city. The aim's simple: inflict as much damage on him and his surroundings as you can, or try and perform tasks such as spanking a monkey in mid-flight.

Alas, the game's concept doesn't come from the warped mind of a fool a la Jackass, but instead comes from teen market research which indicates that the kids are down with comedy and random chaos. When games like Pain are coming from surveys and focus-grouping, SPOnG can't help but feel that the industry has, indeed, grown up, become mature, frail and even slightly frightened by loud noises and youngsters leaning on lamp posts, looking all surly.

Still, it looks like jolly good fun. Details are still scarce, but Pain is expected to be released for the PS3 over the summer at a cost of around $9.99 (Ł5).
Companies: Idol Minds Sony

Moschops 19 May 2007 12:16
1/1
hahaha - one of the signs reads "Moon River proctology" - nice nod to Chevvy Chase classic "Fletch"
Posting of new comments is now locked for this page.