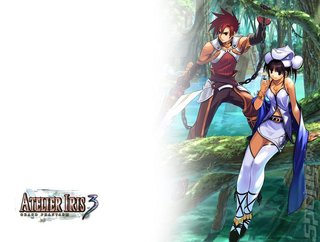 All Images (2) »
KOEI has just announced that it's bringing Grand Phantasm, the latest instalment in the hardcore Japanese Atelier Iris series, to Europe this July on the PS2.

KOEI 's Sales Manager, Will Curley, said, ?The Atelier Iris series has proved to be immensely popular since we first brought it to Europe, ending up as one of the UK?s best selling Japanese RPGs of last year. With this latest instalment featuring countless improvements and advances we hope that fans of the series will see this as a fitting finale to such a fondly regarded series.?

The latest Gust-developed instalment marks the first time that players can freely accept or reject quests, opening up a new level of open play in the series. If you still feel none the wiser, take a look at the trailer below.

For more on Atelier Iris 3 have a gander at SPOnG's dedicated game page.