Kawashima?s Back in ?More Brain Training? 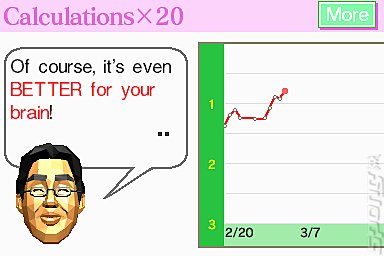 All Images (5) »
Dr Kawashima?s Brain Training: How Old Is Your Brain? has, it?s fair to say, been something of an unexpected phenomenon to many gamers and industry savants, having already sold over an impressive 10 million copies worldwide to date.

So it?s hardly a major surprise that Nintendo is releasing a follow up at the end of June, simply entitled More Brain Training from Dr Kawashima: How Old Is Your Brain?. The new title sticks to the same winning format as its predecessor, in that it is held like a book, with players invited to keep their brain age down by completing some brain twisting exercises in just five to 10 minutes a day, using just the touch screen and microphone.

Nintendo informs us that, ?The DS Brain Age Checks take on a new form in this title as you?re tested on three randomly selected exercises including old school classic Rock, Paper, Scissors which asks you to name the position to either win or lose against the object shown, Memorising 5x5 which sees you remembering the position of numbers on screen and Speedy Symbols which challenges your memory of symbols associated with specific numbers.

The game also features, ?fun new training exercises including Correct Change which challenges you on an everyday day task - to work out the right amount of money to hand back after a transaction as quickly as possible, Missing Symbols, a twist on the classic ?20 calculations? test, and Masterpiece Recital which invites you to follow a music sheet shown on one screen and touch the corresponding piano keys on the touch screen. As your daily training continues, additional new exercises are unlocked, opening up a variety of new activities with varying levels of difficulty.?

You can also play with your family and mates, with up to sixteen players able to participate in four different exercises including Word Scramble, Memorise 5x5 or Correct Change - using a single copy of the game.

Presuming, that is, that you have LOTS of family and mates who are as obsessed with their DS Lite as you are.