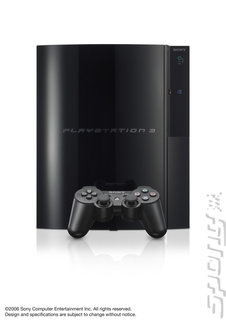 The games industry's most outspoken analyst, Wedbush Morgan's Michael Pachter, reckons that we could see the PS3 drop in price before the summer holidays.

"It is possible that Sony's cost of production for the PS3 has declined to the point that the company may consider a hardware price cut some time this summer, and we may see a price cut for the PS2 before the holidays," said Pachter. "Either of these could serve as a catalyst for sales growth later in the year."

It is, of course, possible. And if it is possible then the company 'may consider' taking everybody out for ice cream and jelly. We hadn't realised that analysis comprises 'may', 'possibly' and 'consider' when it comes to directing people's investments.

Pachter also said that the PS2 will prove a strong platform for movie tie-ins, stating, "Over the next four months, we expect the PS2 versions of Spider-Man 3, Shrek the Third, Ratatouille, Transformers and Harry Potter and the Order of the Phoenix to sell more units than on any other platforms."

Brilliant. We contacted Michael Spilligan, Senior Entertainment analyst at Nomoru Wahrheit Kennis to respond to Pachter. ?I know Michael's work and I have great respect for it. And with the greatest respect, it doesn't take a genius to predict that movie tie-ins are going to sell well on the console with the world's largest installed base."

Spilligan continued, "I predict that over the summer the Nintendo DS will continue to sell in numbers leveraging the extant good will and strong customer-facing marketing vectors. We anticipate that gamers - both globally and locally - will continue to play in significant numbers with Wii, PS3, and Xbox 360s from home. The purchase of games product to facilitate this will see 12% to 28% engagement with Electronic Arts, particularly Ubisoft and strong contention from the first parties.

"The next-gen war is only now entering the 'out-of-trench' stage, my contacts are making it plain to me that online is going to see significant play - monetising at least 45% greater value year-on-year."

Pachter also stated, just last week, that movie studios will dictate a PS3 win in this generation's console war. Is Pachter the most vocal man in gaming? Answers below, please.
Companies: Sony
Games: Harry Potter and the Order of the Phoenix Ratatouille Shrek the Third Spider-Man 3

And will that help the ps3 considering its still doesnt have any games...like...AT ALL?

Now on the other hand microsoft can probably cut the crap out of its pricing considering its using its own plants and factories and its been improving the pricing over a year.

who are they? what chip will work with ps3 and 360? what cock are oyou talking?

tyrion wrote:
IBM are going to use a 65nm manufacturing process for both the PS3's Cell and the 360's Xenon CPUs. Not quite what he said, but in the general area.