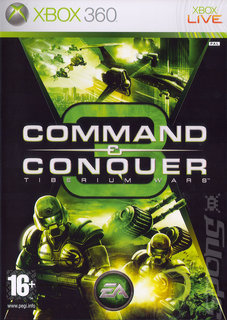 Spidey's still hanging by a web at Number 1 in the charts this week, despite a strong challenge from EA's resurgent Command & Conquer 3: Tiberium Wars.

Last week SPOnG told you that the 360 was carrying the bulk of Spider-Man 3's weight, with Activision's movie tie-in performing best on the next-gen platform. This week, however, the webbed wonder demonstrates once again that the PS2's still going strong, with sales on the last-gen console climbing 73% while sales on the 360 drop 25%.

The wall-crawler's 360 drop-off may well have something to do with the release of C&C 3 on the platform, however. The sci-fi strategy-game is boosted up from Number 20 to Number 2 thanks to its console release on the 360 and Number 1 in the 360 chart. Otherwise, SPOnG can only assume that having seen the film 360 gamers are more appalled by the sight of an emo Spidey than PS2 owners.

Konami's Pro Evolution Soccer 6 sees a return to form thanks to its platinum release on the PS2 and PSP. It's the biggest climber of the week, leaping from Number 25 to Number 4. It slides in just ahead of EA's FIFA 07, which shuffles up from Number 7 to Number 5, still enjoying increased sales thanks to PC bundling.

505 Games' Cooking Mama is a surprise success, entering the Top 10 at Number 6. It was simmering away gently down at Number 23 as a DS release, but the release of the Wii version has obviously made gamers realise that there's some more to cooking than just microwaving Rustlers burgers.

Final Fantasy III secures Square Enix a spot in the Top 10 this week, with the RPG climbing from Number 11 to Number 7.

After falling victim to deicide at the hands and apparently not-so-friendly neighbourhood Spider-Man last week, God of War II is cast down from the Top 10 to peek in from Number 11.