Is this to be the greatest moment in XBLA history? 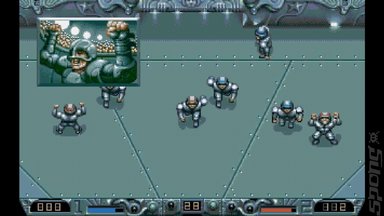 All Images (2) »
Greatest Amiga game of all time? Speedball 2. No argument (and if there is, take it to the Forum). Hell, maybe it's up there with the greatest games of all time.

Whatever, the fact that Empire Interactive ? in association with the legendary Bitmap Brothers ? is bringing the game to Xbox Live Arcade soon is the best news we have heard all month. Hell, maybe even all year!

No official word on release yet, but a little birdie tells SPOnG today that we might see Speedball 2 as early as sometime later in July. If so, this is perhaps the biggest videogame news of the summer.

Empire Interactive reckon that Speedball 2's arrival will please both hard-core fans and ?new generations of gamers who have yet to experience what some believe is the finest combat sports game ever made.?

The original Speedball was first released for the Amiga in 1990 and quickly became a huge success, but it was the sequel, Speedball 2: Brutal Deluxe that trumped it, and went on to sell over two-million units.

The XBLA version is a perfect conversion of Speedball 2: Brutal Deluxe but with the addition of an all-new High Definition version, more teams and downloadable content.

Plus, most importantly, you can tan your mates hides online over Live.

Here?s what Empire CEO, Ian Higgins, had to say, ?With its brutal and addictive gameplay, and the ability to play multiplayer over Xbox LIVE, we are sure this will be the definitive version of Speedball."

SPOnG will be catching up with the Bitmaps in the coming weeks to find out more about S2 XBLA.
Companies: Bitmap Brothers Empire Interactive
Games: Speedball Speedball 2