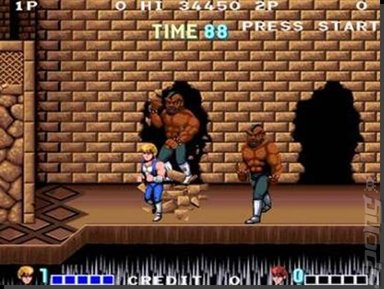 All Images (4) »
Britsoft publisher Empire Interactive has seemingly come from out of nowhere to become one of the new Xbox Live Arcade surprise powerhouses ? what with the arcade conversion of Double Dragon going live on XBLA today, and this week?s announcement that they plan to bring the Bitmap Brothers? Amiga classic, Speedball 2 to XBLA at some point in the future. More on that one later today.

In the meantime, Double Dragon will set you back 400 Microsoft points (Ł3.40) or, if you need reminding whether or not you fancy spunking a few quid on this classic side-scrolling beat-?em-up from way back in ancient history (1987), you can try out the free demo version.

Microsoft?s press bumpf just in reminds us that, ?Double Dragon is the story of Billy and Jimmy Lee, twin brothers who learned to fight on the cold, tough streets of their city. Their expert knowledge of the ancient martial art of Sou-Setsu-Ken, combined with their streetwise outlook, means that they?re two of the most formidable combatants ever to walk the streets. Billy and Jimmy will use their feet, fists, elbows and whatever weapons come to hand to defeat the gang that kidnapped Billy?s girlfriend.?

One of the game?s greatest features (or 'USPs' in today-speak) was the collaborative two-player play option, which you can play in this version, either over Live or with actual real-people in the flesh in the privacy of your own hovel.

The game also features some pretty low-value ?extras? such as ?a look at the original Japanese and U.S. Double Dragon sales fliers? ? which, SPOnG imagines, will only be interesting for around four to five seconds to even the most hardcore fan.

Those Lee brothers, where do the get their wonderful clothes from?

Hypnotoad 10 May 2007 00:29
2/2
Err I think it should really be emphasized that this is a greatly enhanced version of the original game (unlike what your s**tty screens show). Keeping all of the classic original game play, Empire has upscaled backgrounds and remade sprites so it looks a million times better on HD, or indeed SD screens. Give them some credit when you discount their other 'low-value' features SPOnG - they did just about all the could with the actual GAME - who cares about cruddy extras. Compare these kind of releases with the total s**t Virtual Console is pumping out. This is an absolute CLASSIC game that I personaly, and I bet every person (this side of being a spring chicken) has FOND memories of pumping coins into week after week. Now here it is, ENHANCED, co-op over LIVE & at a great price! Credit where credit is due please.
Posting of new comments is now locked for this page.