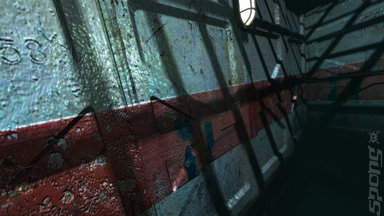 According to the game?s website, "Hydrophobia is a revolutionary survival adventure game which uses HydroEngine to deliver the most realistic water you've ever seen".

Comparisons are already being drawn with those two other next gen big hopes D3?s darkSector and Take 2/Irrational Game?s awesome Bioshock.

Blade's new Infinite Worlds AI system, promises to deliver "incredibly information rich environments" in which enemy AI remember which areas of the levels are flooded, locked and so on, and thus react accordingly.

In Hydrophobia you play as Kate Wilson the eponymous ?hydrophobic? systems engineer who becomes a reluctant hero when terrorists take over a sci-fi-style cruise ship.

Deborah Jones, managing director of Blade Interactive, explains, ?From the outset we wanted to create a robust & unique next generation game that will remain a benchmark for decades. It is a combination of the industry?s best talents combined with awesome technology never seen in video games?.

The game is currently sans publisher, though a Blade spokesperson has just informed SPOnG that, ?There are a few publishers in the running, though until we confirm who we are going with we would of course rather not say anything.?

More on this intriguing sounding watery-based fun when we get it. Blade's last game was the really rather good World Snooker Championship 2007, published by SEGA earlier this year.

Samuel Kat 11 May 2007 16:36
2/2
Looks fantastic. Where can I find more info on this game?
When is it going to be released?
Posting of new comments is now locked for this page.