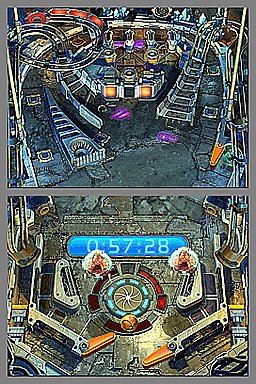 Only a mere twenty months after the game was released in the States!

What can we say about the game? Look at the screens right here and you get the idea. It?s pinball. With a Metroid Prime theme. On the DS.

The ball (technically, the 'pinball') is ? unsurprisingly ? Metroid's beautiful Samus Aran in her morphball form. What is also fairly cool is that you can play the game against up to seven other players wirelessly with only one copy.

Players also get to bend the rules and tilt the table using the DS?s touch screen, as well as a free Rumble Pak, which will vibrate in time with bumps and explosions.

Nintendo?s press release informs us that the game also involves: ?Hitting certain points of a table will allow players to venture into one of many mini games featuring enemies from the Metorid Prime series. Here they must take on Shriekbats in Shriekbat Shootout, battle their way through Beetle Blast and overcome games like Triclops Terror in order to increase their score. Players can collect points and bonuses to improve their scores by defeating enemies, collecting items and guiding the ball into ?hard-to-get-to? areas of the table, all while keeping it safely above the flippers. Metroid Prime Pinball also features the all time classic pinball mini game ? Multiball! Introducing three balls to the table at once, allowing players to earn jackpot points.?

While we cannot help but raise a smile at the thought of finally playing the damn thing in June, SPOnG cannot help but feel the full-price tag of Ł30 for a DS game that?s been out twenty months over in the US already, is a little steep.

More interestingly, Wii's most-wanted, Metroid Prime 3: Corruption is still - as far as we are told by Nintendo UK today - scheduled for a late 2007 release. More on that as we get it.

Bearing in mind it only works with maybe two games I own (Metroid Prime: Hunters and Mario & Luigi: Partners in Time).