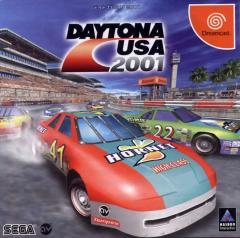 Following the confirmation from Sega Europe that Daytona USA 2001 will not feature online play, the company has clarified what the European release will contain.

"Daytona USA 2001 has received a confirmed European release date as early as April 2001. Dreamcast gamers will be rewarded with a magnificent home conversion of the arcade original, with playability, sound and visuals having a well-deserved upgrade,? went the statement from Sega Europe.

?Due to a heavy scheduling commitment and Sega's continued software focus plan, Daytona 2001 will not incorporate online head to head gaming but will instead feature a host of online functions allowing players to upload/download ghost and replay data together with the facility to upload their fastest times on to the European Ranking Boards"

This is surely not what was wanted from Daytona fans. Much of the excitement that surrounded what essentially amounts to an arcade re-release from 1995 was the head-to-head online play.